The New Wave 5-in-1 Smart Streaming Monitor from Teradek

B&H is happy to announce Teradek’s new 5-in-1 Smart Streaming monitor, the Wave. This 7" IPS LCE monitor has a brightness of 1000 cd/m2, so you can use it indoors and outdoors to watch your program. However, more than just a monitor, the Wave is also a Smart Streaming device, which frees you from having to lug around a separate encoder. The Wave handles encoding, smart event creation, network bonding, and simultaneous multi-streaming to different locations. The Wave will also record your input program to either attached USB storage devices or SD/SDHC cards (class 6 and faster).

The HDMI input accepts video signals up to 1080p60, including 1080p24 and 23.98 as well as 1080i and 720p, so it is suitable for use in a variety of productions. The Wave allows you to monitor the input video signal and stream in AVC/H.264 to RTMP(S) to platforms such as YouTube, Facebook, Vimeo, and Wowza, among others. It features FlowOS, which has been designed and developed just for the Wave, and FlowOS allows you to use the monitor not only to stream and encode, but also to use the Smart Event Creator, as well as live-monitor your video and stream settings with analytics all from the same device. In addition to the HDMI input for video, the Wave supports multiple Internet ports for Wi-Fi, Gigabit Ethernet, 2 x USB ports for Cellular LTE modems, as well as cellphone bonding with an optional Sharelink subscription for a redundant signal. The Wave also powers from optional L-series batteries, as well as a USB Type-C power connector for redundant power.

Mount it on your camera or a stand, or use the included stand so it can stand by itself. The Wave is your doorway to simplified streaming using a single monitor that displays, encodes, records, and handles connecting to your platforms.

How many different devices can the Wave replace in your workflow? Share your thoughts in the Comments section, below.

more info on SD issue: the card that I formatted in the wave is speed class u3 with a write speed of 90MB/s

Do you happen to know which "compatible" sd cards work best?  I'm trying one out now and like it other than it can't seem to keep the stream going when simultaneously recording to an sd card.  Guessing the card in there may be too slow for it.  Documentation is a bit hard to find on such a new item. Other than that...it's a pretty slick little device.

So this essentially is their latest Bonded HDMI Streaming device, with a full screen interface, and onboard recording.  Sound right?

Given that the ATEM Mini series has occasional cache-filling issues, and the record feature on the ISO Extreme sometimes completely locks up and fails -- this can be a one-stop device to assure reliability on both of those areas.  I wonder if it will be simple to use and setup, and more reliable than LiveU Solo?

Also wondering if they will offer a bundle that includes 2 USB 4G (or 5G) modems?

The Teradek Wave Smart Streaming Monitor/Encoder has been engineered for simplicity and designed to be your super- reliable go-to device.  No official word yet regarding any bundled packages.

Dawn B.
8 months ago

It has only one HDMI input so it can only be used with one camera.  Any multi camera solutions to use with this?

Connect it to the output of a video switcher like a Blackmagic ATEM Mini or Roland.

nice but why can't they make a monitor that auto records on start stop flags and feed coming from a teradek transmitter for those of us that work on Movies and TV.?

Patience Ryan.  I am confident we will soon see what you and many others are wishing for. 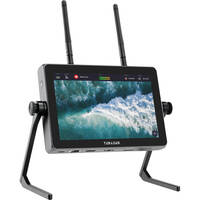