Canon is excited to announce the XF605, the company’s new 4K, 10-bit camcorder, packed with useful features for professional productions ranging from live event to ENG, sports, studio, as well as narrative and location shoots. Slightly smaller than the XF705, the XF605 uses a 1" CMOS sensor to capture 4:2:2 10-bit UHD 4K video in MP4 and XF-AVC, for incredibly sharp video. It also captures Full HD at up to 120 fps, for slow-motion effects, and it records to two SD card slots, providing a variety of recording options from relay to instant backup. Use the camera for simultaneous 4K live output via its 12G-SDI and HDMI output ports, or take advantage of its USB-Type C port to connect it to any computer as if it were a webcam, providing simple streaming options without needing a separate encoder. The camcorder also supports the XFT iPhone app, turning it into a mobile production system.

The XF605 features an integrated 15x optical zoom Canon L lens, equivalent to a 25.5 to 382.5mm in 35mm, for getting in tight to your subject. The lens has three individual rings for controlling focus, zoom, and iris, so no need to flip a switch to select which function to control; just grab the ring you need on the lens directly, or use the camcorder’s built-in servo lens function. The XF605 supports Dual Pixel CMOS AF, pioneered in its high-end Cinema EOS series of cameras, and adds Eye AF to lock focus on your subject’s eye―keeping the attention on your subject and not drifting around the frame. Additionally, it supports EOS iTR AF X (also known as head detection), which will track focus with your subject as they move even should they turn their face away from the camera and walk away.

Adding to its flexibility, the XF605 allows you to select the color matrix in which you wish to work, including the CINEMA EOS color matrix, for better matching and less time spent in post when using other Canon cameras on the same production. The LCD viewfinder supports HDR and features the Direct Touch Control menu that was introduced on the EOS C70, for fast adjustments. Frame and Interval recording modes offer you choices in creating time-lapse effects, while a new multifunction accessory shoe allows you to record four channels of audio via an optional XLR audio interface unit, for clean audio from multiple XLR sources.

An exciting addition to the Canon XF lineup, the XF605 build brings new features and options that make it a great all-around camera that can be used on a vast array of productions, from studio and narrative work to streaming and mobile production. Plus, the XF605 works nicely with Canon’s EOS lineup of cameras, as well as the cameras in the XF series, making it easy to use it in a three-camera production.

Are you looking forward to working with the XF605? Share your thoughts below, in the Comments section.

This looks like my obvious choice to upgrade from my XF205 even though it's only got a 15x zoom compared to my 205's 20x zoom. I saw one reviewer that said this camera has a 30x "effective" zoom length.  Can anyone explain what that means?

"Users can get up to 30x Advanced Zoom when shooting in Full HD, which utilizes the XF705 camcorder's full 4K UHD sensor to extend the zoom range while maintaining image quality."

Does this also have the LANC terminal for remote in addition to the new connector?

Where are you seeing that?  I can't find information anywhere

What happened to Canon putting 20x zooms on their cameras?

It look VERY similar to the ~3 year old Panasonic CX350.  Maybe not as good actually if you compare the recording specs and the streaming capabilities of the Panny. . Although the Canon app appears to push live video too which is an improvement over simple camera control than the panasonic has but that is more about the app than the camera.

I guess when we start seeing reviews, we'll find out about battery life.

But on paper, this camera looks very impressive right now!

Doug - excellent review.  You did manage to leave out one feature though - the built-in ND filter.  For me, at least, that's something I'd like to know more about.  Thanks!

as well as external powering up, Genlock, unique file naming, metadata recording,.. if it is supposed to work in a multi-camera setup

Find your Groove with the Weebill-2, from Zhiyun-Tech
0 Views
06/29/2021
SaveLikeFacebookTwitterLinkLink 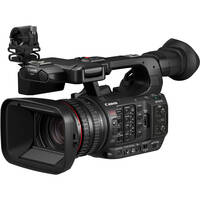