Expanding its lineup of stylish, compact, and modest primes, Sigma has just announced two new I Series lenses: the 90mm f/2.8 DG DN and 24mm f/2 DG DN. Both of these lenses fall under the Contemporary designation and both are available for L and Sony E mirrorless lens mounts. If you look back to last fall, when Sigma debuted the I Series, you’ll remember that this lens designation is all about making lenses that prioritize practicality, aesthetics, and sleekness, rather than pure speed and theoretical performance. This announcement sees Sigma rounding out the I Series, as well as giving shooters a choice at the ultra-wide end.

Beyond just bringing two new lenses to light, this announcement also establishes Sigma’s approach to I Series development more clearly. Currently, Sigma is using a two-pronged approach within this designation: Some lenses are deliberately slow to maximize compactness, while other lenses balance speed and portability.

Following the “slower and sleeker” route, the new 90mm f/2.8 DG DN Contemporary joins the 45mm f/2.8 DG DN and 24mm f/3.5 DG DN to create a nice trio of ultra-small, ultra-portable primes. This new portrait-length prime is the longest I Series lens to date and is characterized by its f/2.8 maximum aperture, STM stepping AF motor, and advanced optical design that uses low dispersion and aspherical elements. It’s a unique complement to the 24mm f/3.5 and 45mm f/2.8 because its form factor is nearly identical—sharing the same 64mm diameter and 55mm filter size—but the longer focal length makes it perfect for portraiture, long-range subjects, or other situations when a bit of separation and visual compression are desired. Also, this 90mm f/2.8 has a 1:5 maximum magnification ratio and minimum focusing distance of just 1.6' for working with close-up subjects, too.

At the other end of this announcement is the 24mm f/2 DG DN Contemporary, which joins the 35mm f/2 DG DN and 65mm f/2 DG DN lenses to form a tight portfolio of sophisticated and practical f/2 primes. Compared to “slower and sleeker” I Series lenses, these f/2 lenses represent balance and practicality. According to Sigma, they feature the same MTF performance as the f/1.4 Art lenses but have a much more svelte design. This 24mm f/2, specifically, uses FLD, SLD, and aspherical elements to control a variety of aberrations and distortions for high sharpness and accurate rendering from edge to edge. Additionally, these f/2 I Series lenses also have a distinct arc-type AF/MF switch that is a bit more tactilely accessible than the smaller switch on the slower lenses.

This announcement indicates Sigma’s desire to have a well-rounded system of lenses that follow a shared ethos, but also shows that Sigma isn’t afraid to give shooters multiple options of the same focal length. Much in the way Sigma has released three unique 35mm DG DN lenses for mirrorless cameras, the announcement of this second 24mm I Series lens is initially a bit of a head scratcher, but begins to make sense after you factor in the reasons for choosing one lens over the other.

The 24mm f/3.5 DG DN is a marked lens because of its impressively compact design, as well as its surprisingly slow maximum aperture; the new 24mm f/2 DG DN, on the other hand, is a more balanced approach to an ultra-wide prime and is faster as well as larger. The f/2 lens has better optical performance than the f/3.5 version, and along with its speed, makes it the preferred choice for astrophotography, landscapes, cityscapes, and street shooting, especially in low lighting conditions. The f/3.5, on the other hand, has the smaller size advantage, as well as the unique 1:2 maximum magnification for close-up shooting, compared to the more average 1:6.7 magnification and 9.7" minimum focusing distance of the new f/2 version.

The 90mm f/2.8 DG DN and the 24mm f/2 DG DN contribute to making the I Series a more versatile designation within Sigma’s DG DN lens lineup and signal a clear push at making lenses that appeal to a wider range of shooters. Rather than focusing on the fastest and most technically perfect lens designs possible, Sigma is focusing on giving shooters practical choices and usable options that prioritize the experience of shooting.

What are your thoughts on the latest I Series releases? Do you have any experiences with Sigma’s other I Series lenses? Are you a fan of these more pragmatic releases or do you favor the all-out f/1.4 and faster lens designs? Let us know your thoughts in the Comments section, below. 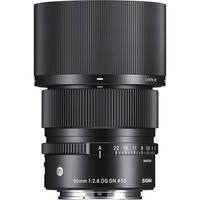 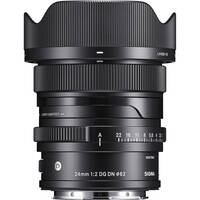