Sigma has announced the 20mm f/2 DG DN Contemporary Lens for full-frame L and Sony E-Mount mirrorless cameras. The widest I-series lens to date, this compact prime shares the f/2 aperture and distinct craftsmanship of its predecessors while expanding coverage to include landscape, cityscape, and astrophotography. Wide, bright, and light, it is equally useful as a video lens, and particularly well suited for handheld vlogging and livestreaming.

Optically, the new lens consists of 13 elements arranged in 11 groups, including one F Low Dispersion (FLD), one Special Low Dispersion (SLD), and three aspherical elements. Distortion is minimal, imaging is sharp, and bokeh is smooth. On an APS-C format camera, 20mm turns into a 30mm-equivalent focal length. You can get as close as 8.7 inches from your subject for creative close-ups, a 1:6.7 magnification ratio.

The seventh of Sigma’s I-series of lenses, the new prime shares a number of stylish and functional design features with previous models, including all-metal construction, a manual aperture ring, and knurled controls. Similarly, it measures slightly less than 3 inches in either direction and weighs 13.1 ounces, making it an easy travel companion whether shooting stills or video. A metal lens hood and magnetic lens cap are included, adding yet another layer of functional elegance. Its mount is dust and splash resistant, while its front accepts 62mm filters.

The L-Mount version of the lens offers the ability to choose between Linear and Non-linear manual focusing, an option that future firmware updates may bring to existing I-series L-Mount lenses.

Have you used Sigma’s I-series lenses? Is there a place for the latest entry in your camera bag? Share your thoughts in the Comments section, below!

How Much Can It Zoom In ?

Keith B.
4 months ago

Does this lens require the separate coupler for updating firmware? I purchased a Sigma Canon EF to Sony E mount converter, only to discover after the fact that it requires a separate Sigma coupling device, $58, in order to update firmware. It seems to me this should have been made known to me by B&H at the time I purchased the EF to Sony E converter, though it was not. 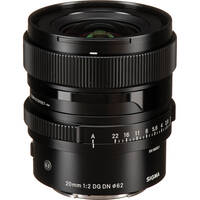