On Tuesday May 27th, B&H hosted a live video presentation that brought together filmmakers David Flores and Eduardo Angel, as well as Matt Frazer, the National Product Trainer for Panasonic's Lumix line, to discuss the virtues of shooting both video and still photos with the Panasonic GH4 digital camera. In case you missed the event, and you don't currently have enough time to watch the entire hour-and-a-half-long show, this post will highlight the key pieces of information that were shared, and explain what makes them interesting.

At the end of each section of this post, a time marker is provided in parentheses that shows you where you can locate the specific section being discussed in the video.

The difference between 4K DCI and UHD

Not all cameras that can shoot 4K video are created equal. There are, in fact, two distinct versions of 4K footage: DCI and UHD. The main difference is rather simple. 4K DCI video has a slightly wider aspect ratio than UHD. Even though this difference is slight, it's still a significant factor. In layman's terms, 4K DCI is more of a cinematic aspect ratio, whereas UHD is a better fit for footage that will be seen primarily on widescreen televisions. An important distinction of the GH4 is that it gives you the option to shoot 4K footage in either of these formats. (7:20) 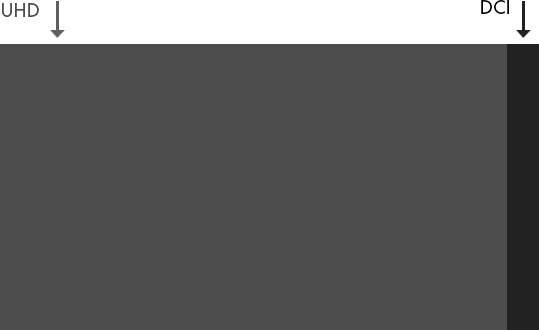 The advantages of shooting in 4K and delivering in 1080p

There's a lot of buzz around 4K video days, but the reality is that very few people can watch it, and video producers currently may not fully understand why they should start shooting in this data-consumptive format. There's more to shooting 4K footage than simply future-proofing your work so that you can share it in higher resolutions down the road. The following creative benefits were discussed in the presentation: 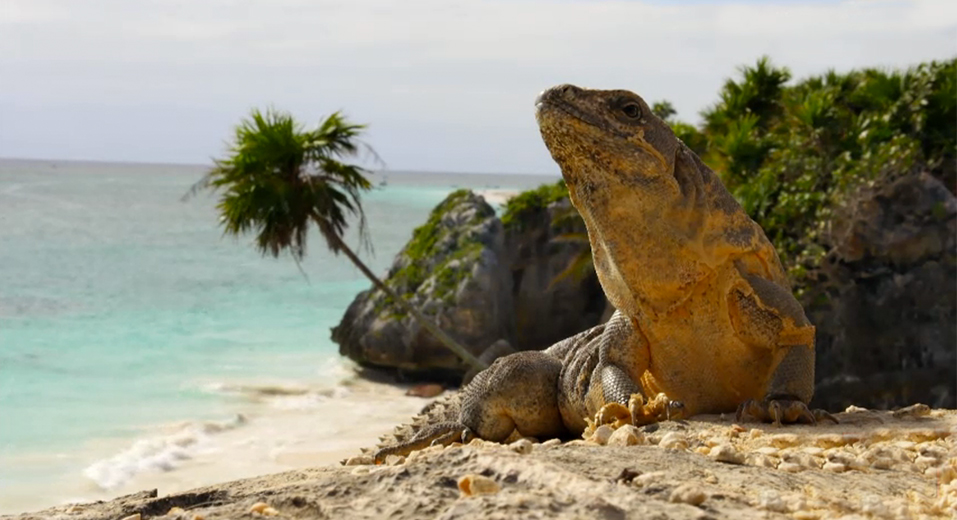 The GH4 has a feature called Silent Shutter, which, as you may have correctly assumed, makes the sound of the shutter silent when you're taking still photos. It's a great tool when you're shooting "Behind the Scenes" style work, especially on-set stills. In contrast, a regular DLSR requires large blimp accessories to silence its shutter. A regular DSLR is already large, and when you house it in a blimp, it gets significantly larger. It's just an awkwardly large thing to tote around a set, whereas the GH4 is significantly smaller and much lower profile. (18:00)

One aspect that tends to throw people off who are new to shooting video with DSLR and mirrorless cameras is properly adjusting shutter angle. The general rule in the past was to make sure that the shutter-speed setting on the camera was twice the speed of the frame rate. So, if you are shooting 24p footage, you must keep the shutter speed of the camera at a 50th of a second. The problem is that this is a tradeoff, because 50 isn't two times 24. It's a compromise. The GH4 does away with this issue by offering the ability to adjust to a true 180-degree shutter angle. (20:00) 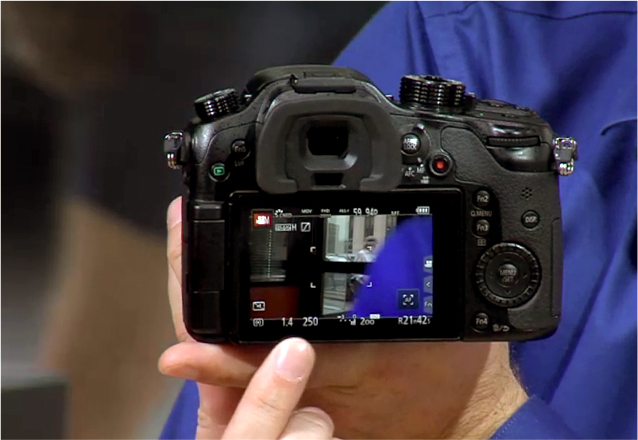 Video examples of the difference between HD and 4K

At this point in the presentation, Eduardo Angel shows some test footage he shot that compares 4K and HD footage. (22:50)

A solid introduction to the YAGH adapter

Matt Frazer walks us through the YAGH adapter, showing how it enhances the 4K workflow when using an external video recorder. Because there are currently no external recorders that can capture 4K video footage from an HDMI port, the YAGH provides four SDI outputs to connect to devices such as the 4K capable Odyssey 7Q or the Aja Ki Pro Quad. In addition, the YAGH also offers dual balanced XLR mic/line audio inputs, audio level dials and LED audio meters. It's important to note that the YAGH adapter isn't required to shoot and save 4K footage with the GH4. (29:00) 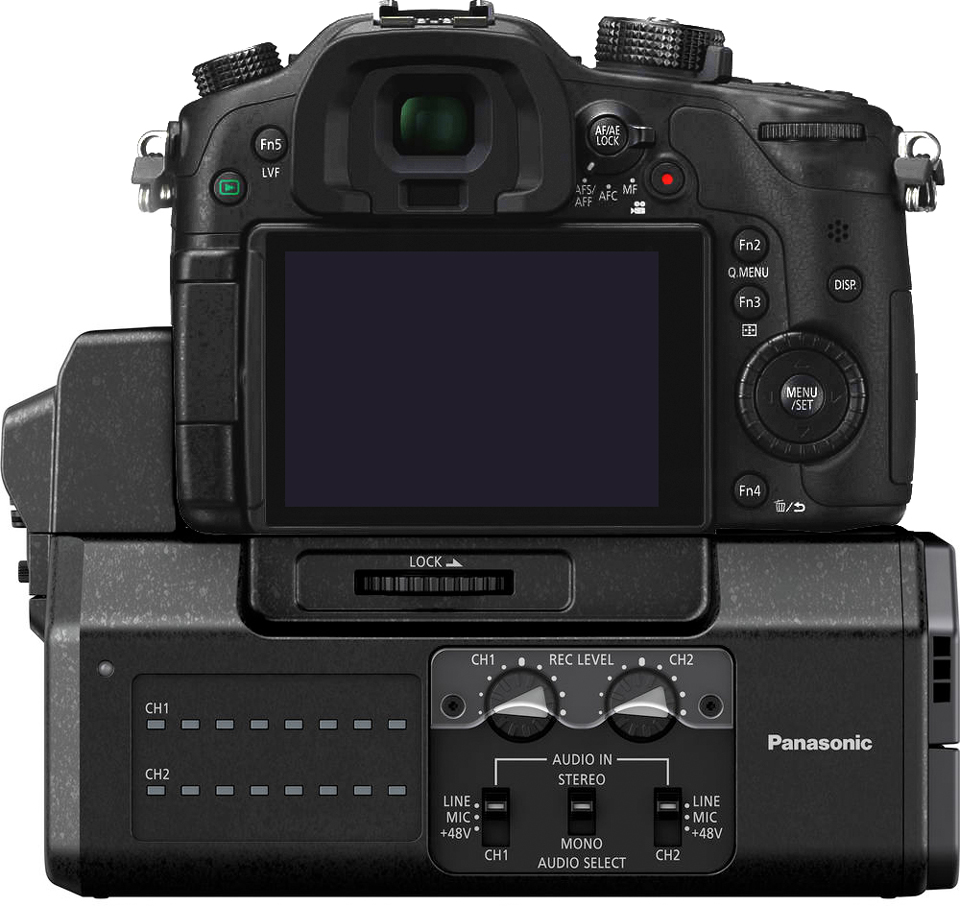 An interesting ability of the SDI outputs on the YAGH adapter

Still talking about the YAGH adapter, an interesting pointer is brought up that if you're shooting 1080p, each one of the four SDI outputs can be used as individual HDMI outputs, to feed video to separate locations (video village, external monitors, recorders, etc.). If you're shooting at 1080p 60 fps, only two of the SDI outputs can be used to pass the signal, but it's still a pretty helpful advantage. (32:00) 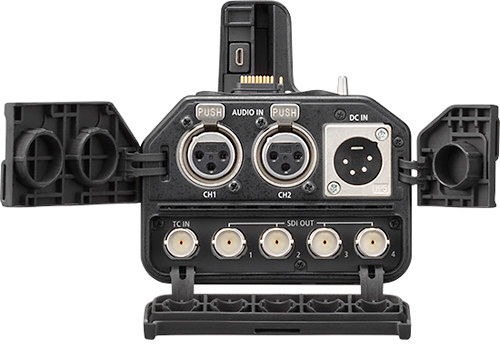 Memory cards for the GH4

Shooting 4K video and being able to capture and save this footage in-camera is a very taxing process, and the speed of the SD card that you use with the GH4 can help you avoid errors. In this section, Matt Frazer, from Panasonic, clearly explains why. Shooting 4K footage with the GH4 requires an SD card that can capture 12.5MB of data per second. Where some people get confused is that they own cards that are able to capture 200MB per second. However, this spec doesn't tell you what the "minimum write speed" is. This is why U3 SD cards are recommended for shooting 4K with the GH4, especially if you plan on shooting footage using the 200MB All-Intra encode. (34:30)

The world of glass for the GH4

If you're already familiar with the Micro Four Thirds format, most of this section is old hat. However, if you're new, you should definitely watch this part of the presentation, as it explains how you can use virtually any kind of lens with the GH4. (41:30)

Using Metabones adapters with the GH4

In this section, Matt Frazer explains how Metabones adapters enable you to adapt Nikon lenses to the GH4, and how Metabones Speed Boosters make lenses faster and wider, and how you can use them to emulate Super 35mm video, a process that is explained in detail in this B&H Explora post. Even though most lenses can be adapted to the GH4, getting the full functionality out of an adapted Canon EF lens can be a challenge. The solution here, as pointed out in the video, is to use the Redrock Micro LiveLens MFT mount. (43:00)

The benefits of shooting video in the AVCHD codec

"AVCHD is a great option when you're shooting very long takes, such as live concert footage."

David Flores explained how he still likes to use the AVCHD codec for shooting and archiving multiple events in a short span of time. Eduardo Angel agreed, but said that when people use AVCHD and need to unnecessarily dedicate lots of time and computer resources to transcoding footage, it can often be the wrong choice. Matt Frazer explains that AVCHD is a great option when you're shooting very long takes, such as live concert footage, but that the drawback is that if you don't have a cutting-edge computer with the latest processor and video card, post production can be problematic. He goes on to explain how the All-Intra codec is easier on your computer, but more memory-hungry in terms of eating up space on your SD cards. (50:30)

The 4K and All-Intra workflow

Continuing on the topic of codecs and data management, our panelists share their insights of how this advanced camera has impacted their personal workflow. Matt Frazer explains how some people get thrown off by the fact that the 1080p All-Intra codec creates significantly larger files than the 4K options. 1080p footage shot with the All-Intra codec typically eats up about one gigabyte per 30 seconds of footage, where 4K averages around one minute of footage per gigabyte. (54:30) Later in the video, Eduardo Angel explains how importing and editing 4K footage is a piece of cake with Adobe Premiere, and David Flores explains how it's equally easy with Final Cut Pro X. (01:01:00)

What's different from the GH3

Eduardo Angel explains how the HDMI D (Micro) port on the GH4 threw him off a little when he first acquired the camera, because it's a different size than the HDMI C (Mini) port on the GH3. However, he was very pleased to learn that the GH4 uses the same kind of batteries as the GH3. (1:00:00)

Why the GH4 doesn't have built-in optical image stabilization

If you've ever wondered why the Panasonic GH series cameras don't have built-in OIS, Matt Frazer explains how this would create a serious heat issue inside the camera when shooting video. In essence, built-in OIS in the camera body is not there to make the GH series better video cameras. It's important to note that many Lumix lenses feature OIS. (01:03:20)

Focus Peaking in the P-in-P feature

The GH4 has a touchscreen, and one of the really nice features this provides is a "picture-in-picture" mode, where a portion of the display is zoomed in, so you can fine-tune your focus, while you can still see the overall frame of the shot. What's really helpful is that the Focus Peaking feature of the GH4 is also active in the zoomed portion of the screen. (01:26:30)

At 1:26:30 you guys are talking about pip while recording. How to set it up? It works fine before I hit record.

Most of the information about pip during recording is contradictory.  But it looks as though the Panasonic rep stated incorrect information, and it is actually not possible to use the MF assist when recording video.  We have an email into Panasonic to verify this, and want to wait to hear back from a rep before contradicting the information put out in the video.

hello, can i use gh4 + yagh unit for live switching with other video cameras..without a video delay? Because i ve heard that dslr cameras have a delay from hdmi port.

The short answer is yes. The long answer depends on the cameras and mixer being used etc.  In order to clarify, please email us at askvideo@bhphoto.com and our Video Agents there can assist you with this inquiry.

is there any information showing how to set up the gh4 with the aja ki pro quad for a 4k 10 bit signal? cant find anything online.

For that you will need the YAGH interface unit.

Once you have that mounted with the camera you would conect 4 SDI cables from the YAGH interface unit to the KiPro Quad to deliver the 4K signal. 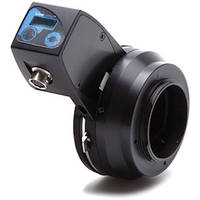 Product Photography for the Future, with Karl Taylor
0 Views
11/19/2022
SaveLikeFacebookTwitterLinkLink