Hate the Holidays? Escape with VR

It's the holiday season and you can't wait to celebrate it with your family and loved ones. There are plenty of presents to go around, food to eat, and bonding to do. Yet, just only two hours in, you start to realize how much you dislike your itchy sweater, the never-right-tasting eggnog, and the nonstop babbling of your cousin's kids. And that's okay, because you've secretly got your escape planned. You just need to work on your excuses to leave. Where do you escape to? Virtual reality, of course. Whether you're gone for a few minutes, hours, or days... (ahem), with the help of VR, you'll be able to leave the confines of your holiday prison and travel far, far away.

To begin, there are three platforms for experiencing VR content: mobile, console, and PC, ranging from least to most powerful. One of the easiest ways to jump in is with Google Cardboard—literally a piece of cardboard with two built-in lenses and a spot for you to place your phone. Setup is quite simple, and it’s the most cost-effective solution out there. Beyond that, the mobile VR scene seems to have hit a wall, with Samsung and Google discontinuing the Gear VR and Daydream VR, respectively.

Next up are consoles. If you have a PlayStation 4, then you'll want to check out PlayStation VR bundles. These kits contain a headset, a camera, two motion controllers, which are all required for a complete VR experience, and a copy of a VR game. Please note that some games can be played using the DualShock 4 controller instead of the motion controllers. Nintendo Switch owners can also join in on the fun with Nintendo’s Labo VR kits. Made from cardboard, these DIY Toy-Con creations offer a variety of ways to play in VR. Xbox currently does not have a VR headset but, don't fret, because there's supposedly one in the works.

Last comes the PC. While not exactly tricky, the PC VR experience requires a bit more, especially if you're looking for more. Not only do you need a headset, controllers, and sensors, but you'll also need a capable gaming rig. Most importantly, that means a powerful processor, graphics card, and probably at least 16GB of RAM.

Current competitors include Oculus, HTC, and Valve. Starting with Oculus, the Oculus Go doesn’t require a PC. As a portable VR solution, it’s also budget friendly, albeit with a fixed amount of storage. Moving up, there’s the Oculus Quest. This is another PC-free VR headset, but with a bit more oomph, built for all-in-one VR gaming. Unlike the Go, which comes with a single controller, the Quest comes with two touch controllers for a more immersive experience. Lastly, replacing the old Rift, the Rift S is the most recent high-end model from Oculus that requires a gaming PC. With PC processing power, the Rift S can deliver the type of VR gaming enthusiasts are looking for.

As for HTC, the Vive and Vive Pro are still in play; however, HTC recently released the Vive Cosmos. This next-gen VR headset features easier setup, inside-out tracking, and a flip-up design. It will require a VR-ready PC and can be outfitted to be used wirelessly with the optional Vive Wireless Adapter. New on this list, is Valve’s Index. Similar to other more complete VR systems, the Index kit includes a headset, two controllers, and two base stations. Unlike other VR experiences, though, the Index Controllers are a bit different, thanks to finger tracking, which adds another layer of immersion. This enables users to make hand gestures, peace signs, pick up objects with just their thumb and another finger, and much more, you know, as if they had actual hands inside their virtual environment.

Alternatively, there are "mixed reality" options from Dell, Samsung, HP, Lenovo, and Acer. These options are cheaper than the Rift and Vive; however, they may not provide you with the “premium” experience, in comparison. These headsets do have inside-out tracking built in, so no additional sensors are required.

Now that you've got the hardware for VR, the world is your oyster and you're free to explore all that it offers. For starters, try viewing some 360 pictures. You'll quickly notice how immersive it feels just by being able to look side-to-side. Better yet, try Google Earth VR to explore the world without even leaving your seat. Then expand your reach to 360 videos. Things start getting interesting here because the VR experience places you directly in the seat of the action, allowing you to ride roller coasters, see wild animals up close, and so much more. You can also watch movies and TV shows on the big screen as if you had your own private movie theater. With the advancement of VR technology, people can now share an experience.

Looking at photos and watching videos are great, but you're still a bystander. One of the most interesting aspects of VR, in my opinion, is the social one. Games aside, with VRChat, users can create, publish, and explore virtual worlds with other people from around the globe. This not only includes user-made environments, but avatars, as well. So, if you’ve always wanted to be a sack of potatoes, now’s your chance. Now, it goes without saying that whatever happens here is probably unregulated and the chance of running into trolls is high, but the potential is there.

VR isn’t just made for entertainment, so if you’re pressed for time and trying to squeeze every minute out of the holidays, it’s also useful in professional, work-related tasks. If you’re a designer or an artist, there are apps like 3D CAD VR, Tilt Brush that lets you paint in 3D space, Blocks by Google for creating 3D objects with little-to-no modelling experience, and TrueScale, an interior designing tool that can simultaneously create 2D floor plans, 3D mockups, and full room-scale environments in VR.

After covering the basics of VR, the hardware you need, and what you can do with it, you’ve got plenty of knowledge to start your own journey. Your experience will vary depending on your setup, but I’m sure it’ll be great regardless. Now, before we go though, make sure to lock your door and move the furniture out of the way or else we’ll probably see you on YouTube. 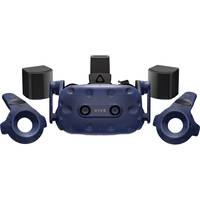 Tips and Solutions
It's Time to Admit It:…
by Jennifer Hahn
1 year ago
SaveLikeFacebookTwitterLinkLink