You asked and Insta360 delivered: announcing the ONE RS 1-Inch 360 Edition Camera, equipped with dual 1" CMOS sensors for 6K 360° video. With this upgraded camera comes a slew of new accessories to deck it out—a GPS Smart Remote, Vertical Battery Base, Invisible Mic Bracket, Lens Cap, a Carry Case, and an Upgrade Bundle. The ONE RS 1-Inch 360 edition expands Insta360’s interchangeable lens ecosystem by being cross-compatible with the ONE RS and ONE R cores.

Once again, Insta360 has partnered with Leica to co-engineer the ONE RS 1-Inch 360’s optical design for optimal imaging. Dual 1" CMOS sensors capture up to 6K video at 30 fps in either 360° or traditional video for social media sharing. The camera is also capable of taking 21MP 360 photos. Like its 1-Inch counterpart, the 1-Inch 360 is equipped with the same ONE RS core with FlowState stabilization for smooth action video and images, improved low-light performance, and 360 horizon lock. The 1-Inch 360 edition is also compatible with the Insta360 app and its editing tools for increased creative control over your footage.

With the launch of this new camera comes the Vertical Battery Base and included mounting bracket, as well as the new version of the GPS Smart Remote, completely changing the form factor of the ONE RS to an ergonomic, handheld device. The battery base’s 1350mAh capacity increases the camera’s battery life for longer production times. When assembled and secured in the mounting bracket, the 360 camera is IPX3 water resistant. The updated optional GPS Smart Remote has an integrated screen to preview your shot in tiny planet, wide angle, and fisheye fields of view, as well as toggle between modes and presets. If you have already purchased the ONE RS or ONE R, an Upgrade Bundle gives you the 1-Inch 360 edition lens, the vertical battery, and mounting bracket to upgrade your preexisting core.

To accommodate for the lack of a built-in microphone, Insta360 created an Invisible Mic Bracket to attach either the RØDE Wireless GO or GO II wireless recorders to your camera for improved audio, without compromising your 360° footage. A Lens Cap covers the dual-sided lenses when the unit is not in use and protects them from scratches when in transport. The new Carry Case stores the ONE RS 1-Inch 360 and its compatible accessories in one case to take on your next shoot.

Has the ONE RS 1-Inch 360 Edition sparked your interest? Do you have any fun 360° video plans? Let us know in the Comments section, below. 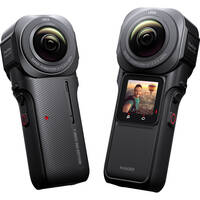