With the release of the 15mm Supreme Prime, ZEISS has completed the 14-lens set of Supreme Primes, a task requiring technical perfection that yields a sharp yet beautiful organic look covering full-frame and larger sensors. Since it shares focus and iris gear positions with other lenses in the series, working with the 15mm Supreme Prime will come naturally and smoothly as you add it to your set. But it isn't just the mechanical perfection built into the Supreme Prime lenses that distinguish them from so many others. Rather, it is cinematographers' ability to create their own look by taking advantage of all the attention ZEISS paid to creating beautiful images—something that, with the race for digital perfection, can be easily lost, though not with the Supreme Primes.

Like all Supreme Prime lenses, the 15mm can be used on formats ranging from Super35mm (and smaller) to Full Frame+, allowing you to get familiar with the aspects of your lens, eliminating the variables encountered when you must change lenses while shooting in a different format. One of the defining image characteristics of the Supreme Prime lenses is focus fall off, providing a smooth transition for a natural appearance, and what some would term elegant bokeh.

The lenses also handle contrast extremely well; they can protect the dimmest parts of your images from washing out, even when the frame includes both bright highlights and areas of intense darkness. You can feel confident shooting in high- and low-contrast situations because your lenses have the resolution and ability to handle virtually any look you are trying to create.

Though slightly larger than most of the Supreme Primes, the 15mm sports the same front diameter as the 18 and 135mm lenses, allowing you to use the same lens accessories easily. It has a fast maximum T1.8 aperture, which is great for low light conditions when you don't want to be underexposed but still need a sharp image with definable areas of focus. As with the other lenses in the Supreme Prime lineup, the 15mm comes with a PL mount that can be swapped for an LPL mount. It supports the ZEISS eXtended Data technology, which has become a useful tool for focus pullers and DITs, and ever so important to VFX artists for creating seamless composites.

With the addition of the 15mm to the Supreme Prime lineup, ZEISS has created a complete lens system of 14 lenses that cover focal lengths from 15mm to 200mm for full-frame and beyond sensors. If you have experience with or comments about the Supreme Primes, please feel free to share your thoughts in the Comments section, below.

For more information on ZEISS Supreme Prime lenses, visit the B&H Photo Website or if you're in New York City, visit The Studio at the B&H Photo SuperStore.

Do any of these lenses go with mirrorless cameras of Canon.

These lenses are reserved for cinema type cameras. 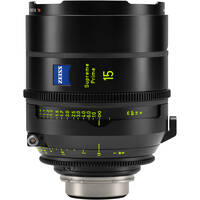