You may have heard rumors of a new professional battery mount recently and been wondering, “Is that a new battery mount, or should I get my hearing checked?” If you believe what you are hearing is the term “B-Mount” and not “V-Mount,” then you can relax, you got it right. With this first major update to pro batteries in years, ARRI has teamed up with bebob to create what the company hopes will become the new standard for 24-volt batteries, cameras, and related gear: the B-Mount battery. The system is well thought out, as you would expect when you team a company known for its camera and lighting gear with a pro-video battery company. The new B-Mount resulting from this collaboration promises some advantages over the common 12-volt Gold mount and V-mount battery systems that are currently available.

24 Volts—this is the impetus behind the new B-mount system. ARRI has been making 24-volt cameras for a long time, even before digital cameras, when in the days of film cameras ARRI switched over to 24 volts because of the obvious advantages, which include being able to pull more power without needing to use heavier wiring. With digital cine cameras, ARRI continues to favor 24 volts, because it provides more power for the cameras to achieve higher frame rates and better performance. 24 volts isn’t a recent standard either; it has been around for decades in block batteries for motion-picture cameras and all current ARRI digital-cine cameras. A great deal of ARRI’s lighting runs on 24 Volts.

The B-mount is not some move by ARRI to lock you into its batteries—on the contrary, the ARRI B-mount is available to any manufacturer that wants to incorporate it into their batteries, cameras, or lighting. While available to anyone who wants to use it, ARRI and bebob will maintain control of the standard. This control of the standard, while simultaneously making it available, is meant to combat changes that occur when manufacturers attempt to reverse-engineer, or come up with their own version of other popular mounting systems, thus ensuring interchangeability between multiple battery and camera/lighting brands. Just remember, the B-Mount is a standard for these 24-volt batteries’ electronic and mechanical interface, but even so, don’t get your hopes up that your B-mount charger will be able to charge third-party B-mount batteries, because there is no guarantee that will happen.

The B-mount, which slides on from the side and not the top, like the older V-Mount, has the release mechanism built into each battery instead of the plate. While that may seem counterintuitive, it offers a few advantages. First, it makes the battery plate less complex and lighter; second, it also makes the battery plate thinner, which is helpful to get as far back as possible when you are in tight spaces, so you pull the battery and power your gear from a cable. Is it a huge space savings? No, but when every inch of space counts, it is nice to have even half an extra inch. The simplified mount on your device can also be more robust, which comes in handy for some operators who forget about using pan handles and will grab the camera by the battery pack when panning and tilting. The rock-solid connection helps protect the electronic connections, as well.

A lot of detail has gone into the B-mount battery system. Most notably, although it is designed as a 24-volt system, there is also a 12-volt system for legacy gear. It uses the same physical mount and same connectors, but each plate has a chip in it that directs the battery to deliver either 24 volts or 12 volts. B-Mount batteries can run 24 volts or 24/12 volts, and the voltage that goes to your device is controlled by the plate on your device, so there are no switches to set, no wire jumpers to move. Put a 24-volt battery on a 12-volt device and it won’t power the device, thus protecting both camera/light and battery. The B-Mount features many data protocols, which manufacturers can choose to support, making that information available to your device, which can be a benefit for owner-operators or rental houses that will now have to stock only one kind of battery. It supports SMBus communication and provides accurate battery information, even when using stackable batteries.

The Future is Now

While ARRI is going to release its next digital cine camera as the first native B-Mount battery camera, B-Mount batteries, plates, and chargers are already available and in everyday use. ARRI makes an adapter plate for the ALEXA Mini/Mini LF, bebob makes B-Mount batteries, as well as B-Mount adapters to fit on Gold-mount and V-mount plates. Numerous manufacturers have already signed on to the B-Mount system, which is poised to replace the venerable Gold and V-mount systems of the past, and with the specifications and standards available to any manufacturer, the B-Mount could well become the standard 24-volt battery system for years to come.

What are your thoughts on the robust new B-mount battery system? Please share them in the Comments section, below.

How does it switch from 12 to 24? Does it change the path of the power or is there a DC-DC converter stepping the power down to 12V?

A lot of detail has gone into the B-mount battery system. Most notably, although it is designed as a 24-volt system, there is also a 12-volt system for legacy gear. It uses the same physical mount and same connectors, but each plate has a chip in it that directs the battery to deliver either 24 volts or 12 volts automatically, with no physical switch to set. 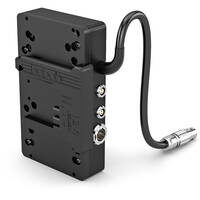 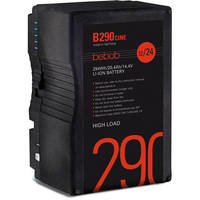 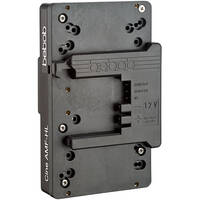 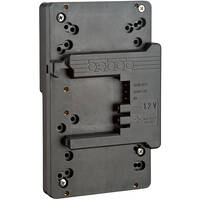