The cloud is looking like the big winner of 2022, with many companies announcing new tools and solutions to help bring the cloud down to earth. Blackmagic is making one of the biggest splashes here with its DaVinci Resolve 18, offering Cloud Collaboration and a variety of new Cloud-centric hardware to make working with remote teams even easier.

After a few years of the daily challenges of remote work, we are finally starting to see the full results of developers working to create the best tools for those looking to maintain their remote capabilities. DaVinci Resolve 18 is a great example of that. The new cloud collaboration, in conjunction with the new Blackmagic Cloud service, will allow colorists, editors, VFX artists, and audio engineers to work simultaneously in the same project.

Blackmagic Cloud is the key to collaboration in Resolve 18. It will run at a cost of $5/month for the host (collaborators do not need their own subscription) and allow users to host their project files in the cloud using the DaVinci Resolve Project Server. This allows anyone connected to the project to access the current version in real time and make updates alongside others on the team.

A new Blackmagic Proxy Generator App comes with Resolve 18 and will automatically create and manage proxies. Using watch folders, new media is generated in H.264, H.265, or ProRes formats for faster workflows. Resolve knows where all these files are and makes switching between originals and proxies as easy as a single click.

Resolve 18 also adds intelligent media location management so that collaborators can quickly link to their file paths to eliminate the need to relink assets manually. There is a lot here to support remote workflows and collaborators.

Other upgrades come to the more familiar areas of Resolve's tool set. The DaVinci Neural Engine, for example, brings more accurate and speedier object masking and tracking. A new depth map effect will generate a 3D depth matte of the scene to separate background and foreground faster.

Graphics can be applied to surfaces that warp or change perspective for a more engaging effect. Also, the ultra beauty tool will help with natural retouching.

Subtitles now include TTML and XML timed texts and embedded MXF/IMF subtitles. You can view and import subtitles, create regions for multiple captions per track, and set presets and text positions for different speakers.

Fairlight has received a few enhancements, too, including FlexBus for more flexible audio busing and routing, and the ability to convert legacy-fixed bus projects to FlexBus with a single click. Spatial audio changes include updated support for Dolby Atmos to support binaural output for monitoring with headphones. 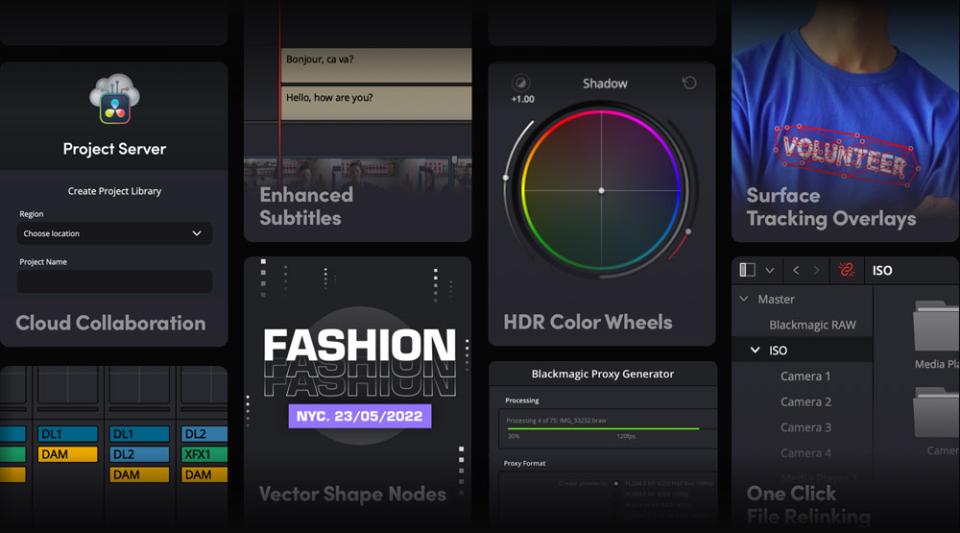 There's a lot going on here and way more than we can fit into this announcement. Be sure to check out Blackmagic's pages for the full details.

The Public Beta of DaVinci Resolve 18 is available to download right now from Blackmagic's website, and owners of DaVinci Resolve Studio will again receive this as a free update. However, be wary of installing beta software on your machine, especially if you rely on Resolve for your work or are in the middle of a project.

Build Your Own Cloud with Cloud Store, Cloud Store Mini, and Cloud Pod

Designed with the needs of film of television production, the Cloud Store is a highly capable and speedy networked storage solution that can handle massive 12K raw video files while letting multiple users access the data in real time.

The Cloud Store features a vertical design that can be sat on a desk or used on location with ease. It features M.2 flash storage and will be available in 20TB and 80TB versions. Configured in RAID 5, users will enjoy some degree of redundancy to prevent data loss, as well as faster read and write speeds.

Connectivity is provided mainly through four 10G Ethernet connections and all can be operated at full speed at the same time. All can be used together to create a 40G connection. Plus, two 1G Ethernet ports are available for working with a variety of machines with different network capabilities. Two USB-C ports are present for loading and backing up files, and if a disk is connected, all the files can be loaded into the Cloud Store.

A neat feature of the Cloud Store comes from its USB Type-C port with integrated Ethernet adapter. Users working on a device without its own Ethernet port, such as a laptop, will be able to make use of the Ethernet connection. This port can also be used with USB-C drives to create a local backup.

A smaller, rackmount version of the above is the Cloud Store Mini. It uses four M.2 flash memory modules in a RAID 0 configuration for a total of 8TB of blazing-fast storage. It has 10G and 1G Ethernet ports and will operate as a network switch. This allows anyone on the network to access the data with no latency. It also has the same USB-C to Ethernet adapter and USB backup functionality as the full-sized Cloud Store.

If you aren't in need of a full-fledged network server and want to use existing USB drives, look to the Cloud Pod. This relatively compact network device features a 10G Ethernet connection and two USB Type-C ports. Users can connect any USB-C drive and then use the Cloud Pod to make those drives accessible to anyone on the network.

Teams that use a Cloud Pod in each location will be able to sync up so that everyone has access to a local copy for maximum speed. It is a good solution for individuals working at home or for small teams.

All the Blackmagic Cloud devices share features such as HDMI monitoring output to get a real-time look at storage status. They are also all compatible with Dropbox for integrating into existing file-sharing systems. And there is the Blackmagic Cloud Pod utility, available on Mac and Windows, to make any changes to the system.

The best part about setting up your own networked storage is that there are no subscriptions or licenses required and no user data tracing.

Optimized for one-handed operation, the HyperDeck Shuttle HD is a compact, desktop media recorder/player that is perfect for those using the ATEM Mini. It features traditional broadcast deck controls, including a large search dial. It also uses HDMI connections for video input and output for working with many different devices.

Users can record H.264, ProRes, and DNx file formats to SD cards. A USB port is available, and users can record directly to any attached media. Using a hub of Blackmagic MultiDock will allow for recording across multiple disks for essentially nonstop recording. And a 1G Ethernet connection allows for remote control and upload.

A new function is the ability to use the HyperDeck Shuttle HD as a teleprompter. It can read RTF text files with support for size, color, font weight, and alignment formatting.

It's a compact, yet powerful tool for users.

4K productions in need of traditional broadcast deck controls and recording will want to pick up the HyperDeck Extreme 4K HDR. It is similar to the recent 8K model that was released, and highlights the ability to record in H.265 in addition to ProRes, use an optional internal cache, and has 3D LUT and HDR support. The device features a large touchscreen for a crisp, bright view of the current program, although it is designed to be paired with the HyperDeck Extreme Control.

There are some deck controls to the left of the screen and, on the right side, users will find two CFast card slots that will support the ability to swap out full cards for unlimited recording. USB-C disk recording is supported, as well as 10G Ethernet for media upload and remote control.

HDR productions will enjoy the HyperDeck as the built-in scopes will automatically change to support HDR formats. The bright LCD will support Rec.2020 and Rec.709 color spaces and can even produce 100% of the DCI-P3 space. A full array of monitoring tools is available, including waveforms, vectorscopes, and histograms. 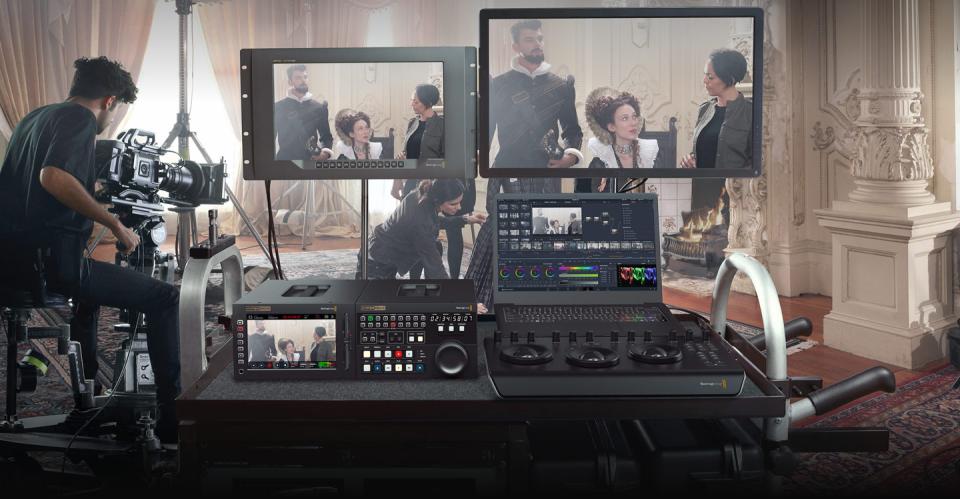 There is a lot going on with the HyperDeck Extreme 4K HDR, if you are looking for more traditional broadcast tools designed for modern workflows and formats.

Packing impressive feature sets into relatively affordable products has been a staple of Blackmagic releases. The latest live production switchers—the ATEM Constellation HD family—follow this trend and are designed to be more professional upgrades for ATEM Mini users with 1080p workflows.

Each has a rackmount design and there is a built-in control panel for setup. All the inputs and outputs are located on the rear, including 3G-SDI aux out, balanced audio, and Ethernet. The 4 M/E model also features RS-422 for series control and MADI digital audio connections.

Fully independent 3G-SDI outputs are present on each model. They scale in a similar way to the inputs with the 1 M/E model, offering 6 outputs, the 2 M/E offering 12 outputs, and the 4 M/E offering 24 outputs. They can be independently routed or be used for ISO recorders. Each includes program audio, RP-188 timecode, SDI camera control, tally, and talkback.

There is a lot more going on in these switchers that will help users get set up. This includes built-in multiview, broadcast-quality native transitions, talkback, media pool, advanced keyers, and plenty more.

The final piece of Blackmagic's NAB releases is a high-intensity light source for their Cintel Film Scanner. Working at a higher power, this light source can produce scans with better quality at faster speeds. It is made from a square array of 576 LEDs in a grid pattern, which are focused onto the film with a new light cylinder.

Users will see the largest benefit when recording in HDR. This new light source will allow the Cintel to operate at up to 30 fps, a significant improvement from the previous limit of 10 fps. 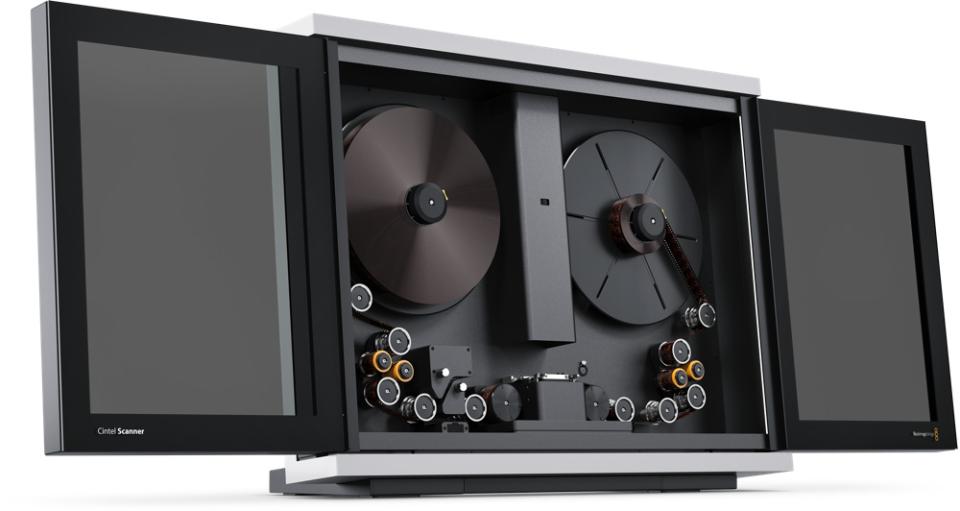 A brand-new feature made possible through this upgrade is a film-inspection mode. The light source's direction can be adjusted to shoot at a different angle to better show any dust or scratches on the film. Software controls provide full control over the light.

Every year Blackmagic comes to NAB with a plethora of releases, and this year doesn't disappoint. Notable cloud storage solutions along with Resolve 18 will appeal to users looking to create their own remote workflows. New HyperDeck options will improve existing and new setups. Additionally, a nice upgrade comes to professional film scanning.

Which new release are you most excited to start using? Let us know in the Comments section, below. 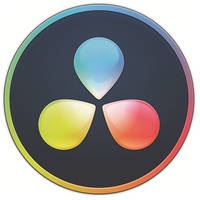