Nanlite released its first tube lights three years prior to the release of the latest version, the PavoTube II X-Series. The original PavoTubes were a great, budget-friendly option for shooters, but there were a number of fair criticisms regarding the lights’ design and performance. The PavoTube II X-Series of lights tackle most of these issues by implementing improved LED technology, added features, and a redesigned body.

My kit included four lights, power cables, power adapter safety straps, four T12 clips, 1/4"-20 eye bolts, and a carrying bag. There is a variety of available accessories that may enhance the capabilities of this unit, but the kit includes everything you need to power, mount, and store the fixture. 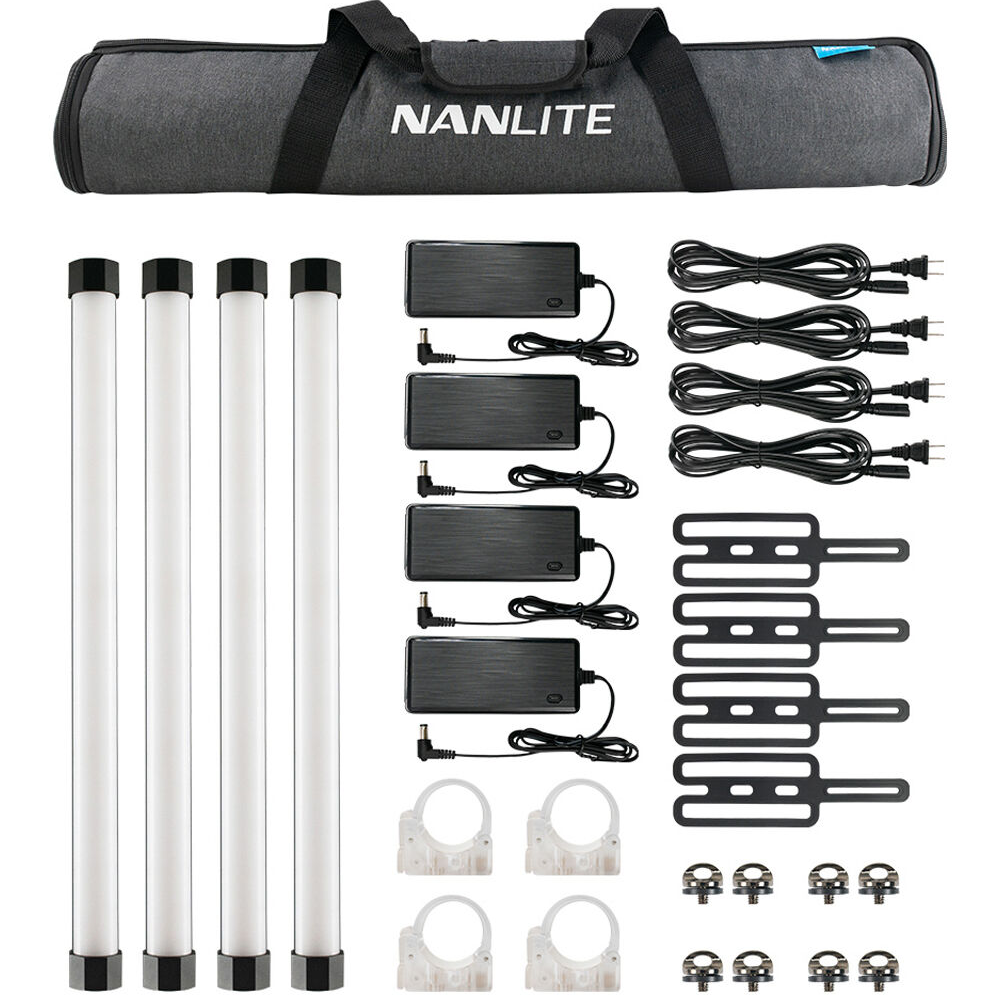 The first accessory I would reach for is the Fabric Barndoors and Grid. I recommend picking up at least one of these so you can direct your light more easily. The next thing I want to add is the Quad Adapter. This adapter simply lets you attach up to four tube lights to one light stand. You can also get D-tap cables, DMX Y adapter cables, desktop stands, a transmitter box, and more. I will elaborate on some of these accessories below.

The most noticeable difference between the PavoTube II 30X and its predecessor, the PavoTube 30C, is its improved form factor. These new PavoTube II X-Series feature slimmer, flat, end caps. This creates more area for the light portion of the fixture. The body of the light is now made out of a durable metal instead of plastic. You won’t catch me crash-testing the lights in this review, but the construction feels much more trustworthy.

The light itself weighs 3.8 lb (1.7kg). When all of the lights, power cables, and mounting accessories are packed in the included carrying bag, it weighs around 20 lb. I found the weight to be quite reasonable, but the length of the package made it awkward to move and store. 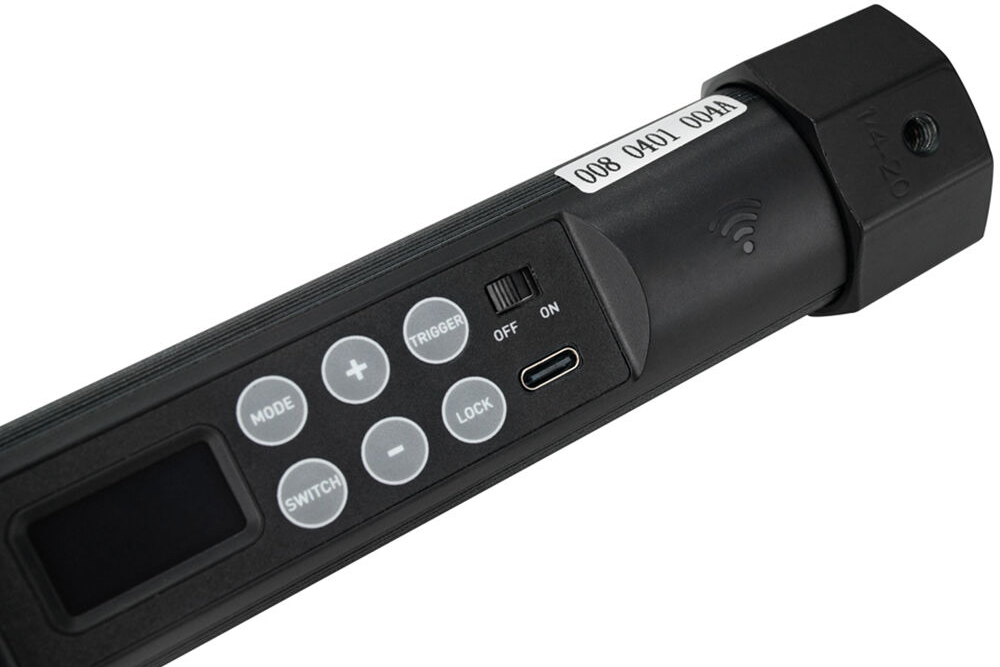 What was really great about working with these lights was how easy the lights are to manipulate. Sometimes lights can be heavy or bulky devices that are not easily adjusted. The form factor of the PavoTube II X-Series made moving and adjusting the light very easy, especially for situations in which I was the only one behind the camera. The lights also fit in places where others cannot. You can fit them easily in the back seat of a car or in the corner of a small room. 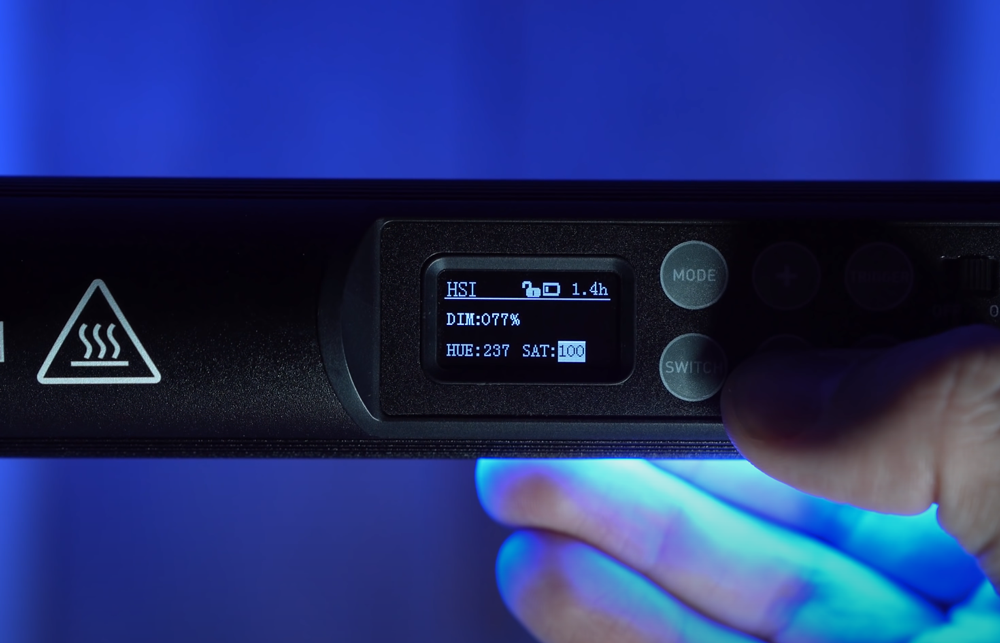 My first stop was the CCT mode, which allows control over color temperature and intensity. There have been some really great improvements to this mode, including an extended CCT range and the ability to adjust the green and magenta shift. The CCT range is now 2700K to 12000K. Matching ambient light was incredibly easy. In this mode, it simply acts as a bi-color LED light. 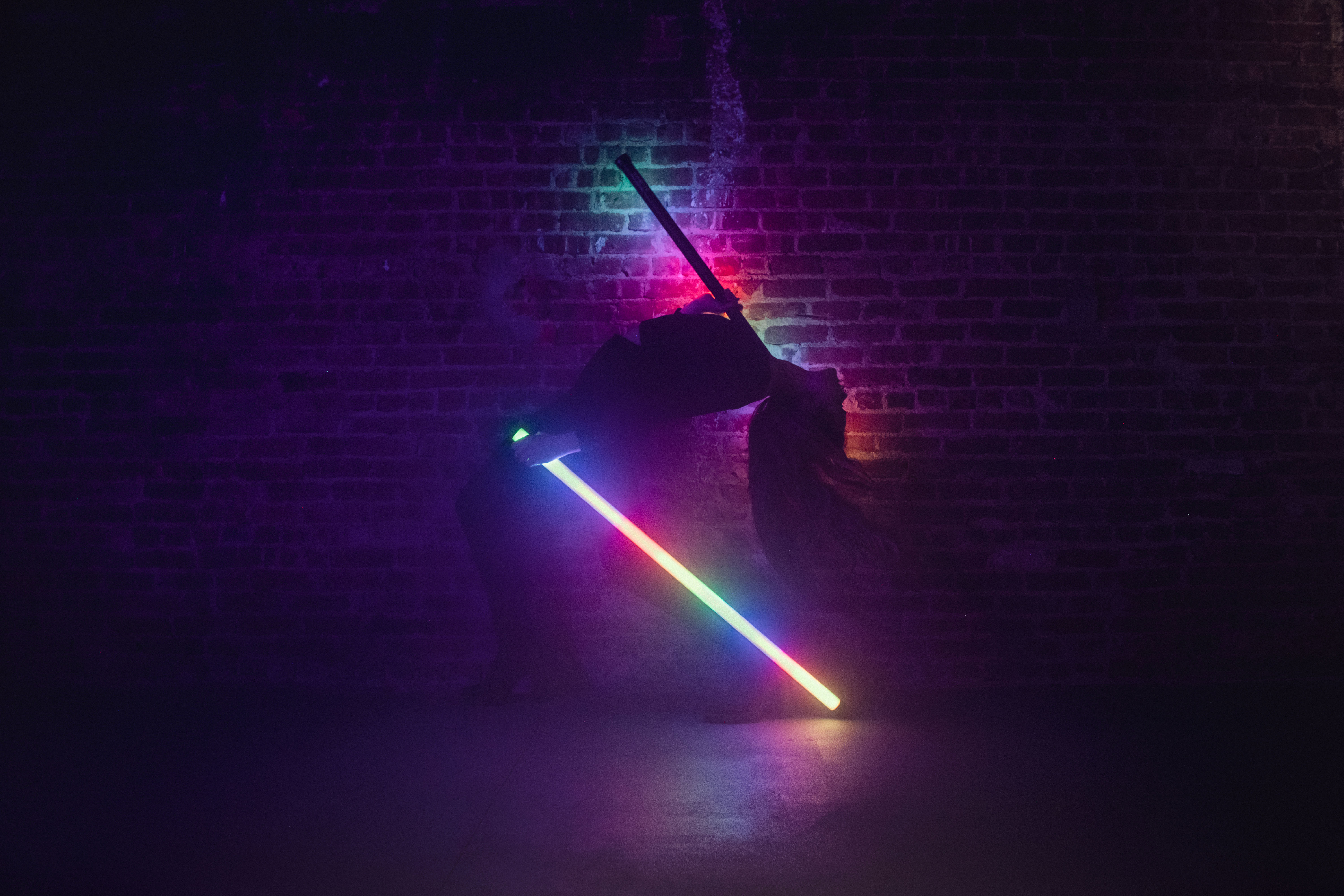 Next stop was the HSI mode. Here, you can adjust the light’s hue, saturation, and intensity. Hue is selected on a 360-degree color wheel. The intensity and saturation are adjusted from 0-100%. 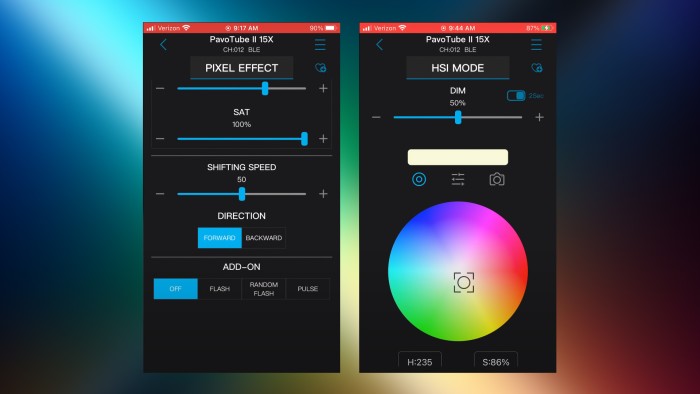 Possibly one of the most exciting modes on the PavoTube II X-Series is the Effects mode. Here, you have fifteen built-in effects to choose from. The hue loop, CCT loop, and intensity loop are classic effects that cover a broad range of applications. You can also choose from some more specific use effects like “broken bulb” or “cop car.” Each effect has unique controls for you to adjust the applicable parameters.

The Pixel Effects mode is a brand-new feature that gives you even more creative opportunity. This mode uses pixel mapping to allow individual LEDs to fire without affecting the entire fixture. Many of the effects in this mode will scroll or loop a variable from one end of the light to the other. The Pixel Effects mode can help you enhance practical lighting with modes like Flame, Driving, and Marching. 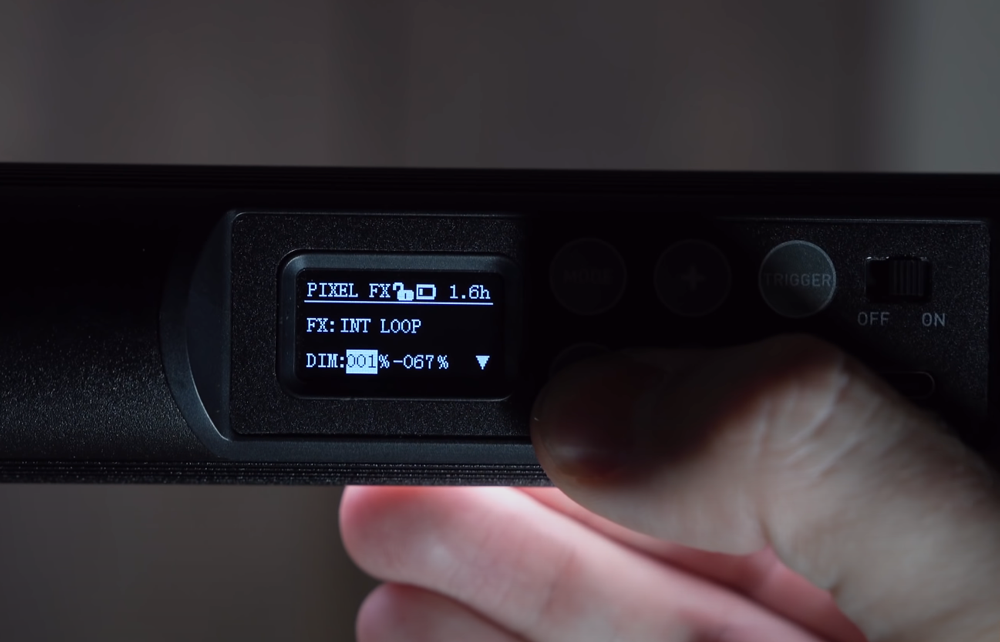 More on the Modes

I was able to light a subject effectively for an interview using only the PavoTube II 30x lights in CCT mode. The grid and barn doors came in handy in this scenario for preventing the light from spilling into unwanted areas. Even adding accent lighting to the background of the image was made easy. I used the HSI mode on the background light, which added a splash of color. I would have preferred to use the PavoTube II 6C for practical background lighting, due to its shorter size, but the 30X model did a fine job. 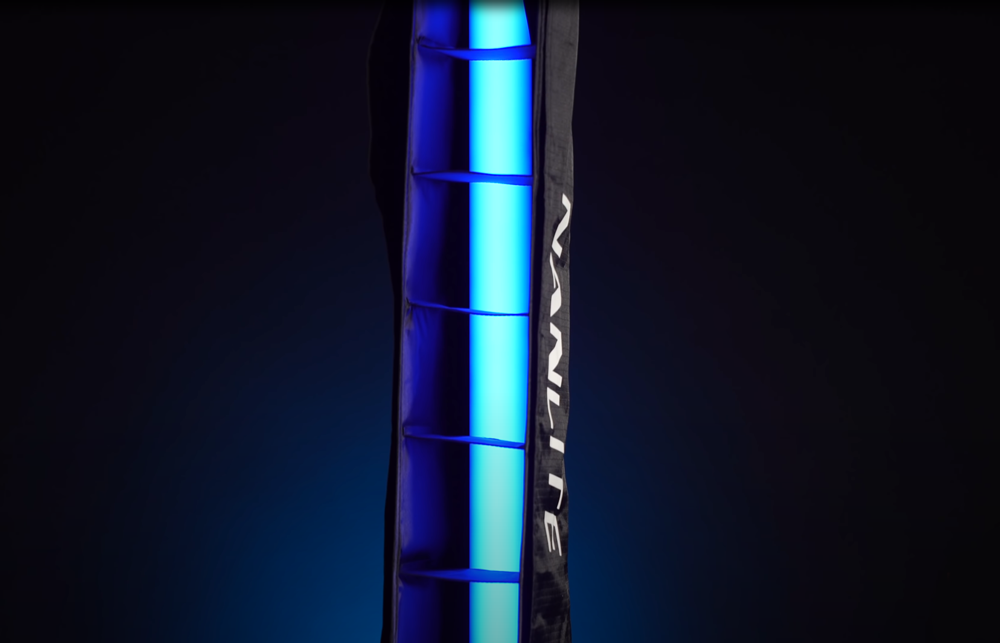 The PavoTube II X-Series could also be a really great solution for people who shoot music videos. With the various modes available, it should be no problem for you to create dynamic lighting setups.

I would even point social media personalities toward the PavoTube II X-Series. A set of two of the PavoTube II X-Series would allow you to set up beauty lighting as an effective alternative to a ring light, which can often produce the reverse effect. The ease of use of the product may also help in the “on-the-fly” style of shooting that influencers typically practice.

I also used the PavoTube II X-Series as lighting for teleconferencing. I set one tube on each side of my desk and turned them to the CCT mode. Often, our webcams render grainy or noisy images. This is because they are desperate for more light. The PavoTube II X-Series may be your ideal solution—they’re slim and provide the light your webcam needs to make you look good.

I was very impressed with the performance of the internal battery on the PavoTube II 30X. You can also power the lights with the included power cable. The transition from battery power to wall power is seamless. I found it handy to be able to disconnect the power cable and adjust the light’s position without being tethered to the wall. The charge time for the PavoTube II 30X is only about 3.5 hours. However, the light will charge whenever you have it plugged in, even if it is switched on. When the internal battery is not enough, external battery options are available. You can easily use Gold mount, V-mount, or other battery types when you purchase the Nanlite D-Tap to 5.5mm Male DC Barrel Power Cable. Most of us have at least one or two of these batteries.

In similar fashion to powering the PavoTube II X-Series, you have options when it comes to control. The controls on the back of the light are fairly easy to use. In my experience, the display was always easy to read, and the menus were laid out nicely. There is also a DMX connection on the unit if you need to integrate it with an existing lighting system. 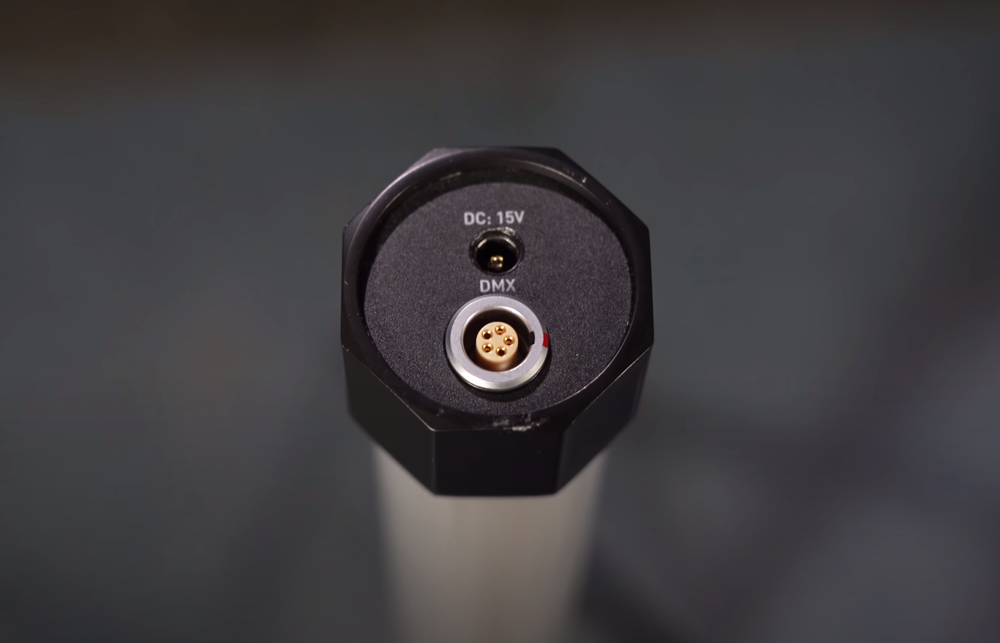 You also enjoy wireless control options, including Bluetooth and 2.4G connections. The NANLINK mobile app lets you connect directly to a light and change its settings via Bluetooth. I find the need to create an account to use an app like this a little unnecessary, but my overall experience with it was fine. The instruction manual and the app were a little ambiguous regarding how to connect the lights to the mobile app. Once I had the lights connected, changing the settings on them was much easier. The app has certainly improved from its initial release.

If you purchase the separately available transmitter box, you will be able to connect to the lights with a 2.4G connection. This may offer a more reliable wireless connection.

The versatility of the PavoTube II X-Series cannot be overstated. Tube lights are a great option for people who need a quick and easy lighting solution. They are especially handy when you need to place them in confined or hard to reach spaces. 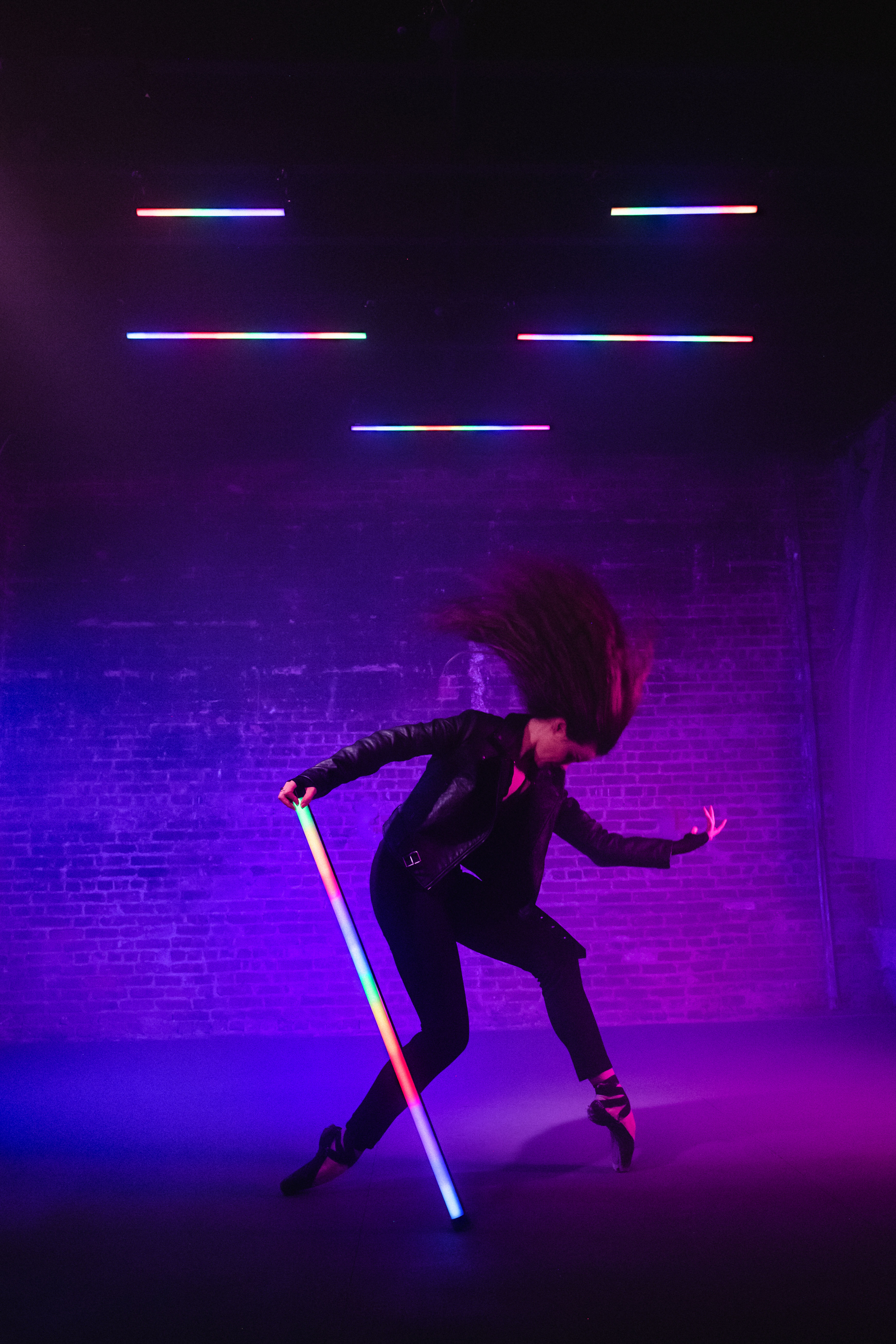 LED Tube lights are not new to the market. What Nanlite is offering us is a budget-friendly alternative to some of the higher-end tube lights from Quasar or Astera, without sacrificing quality. The PavoTube II X-Series exceeded my expectations, given the fact that you can get two of them for the price of one Astera TitanTube. One thing I was not able to test is the longevity of the battery. I am interested in seeing how the internal batteries fare over time.

I always have a couple of RGB lights on hand when shooting. From time to time, I find that the only thing a shot needs to make it a great one is a little splash of color. The PavoTube II X-Series is much more than just an RGB light, though. It can fill so many shoes at once. Anyone who shoots video should consider how a set of lights like these could benefit them. I know that I will be keeping one or two of these around for future shoots. 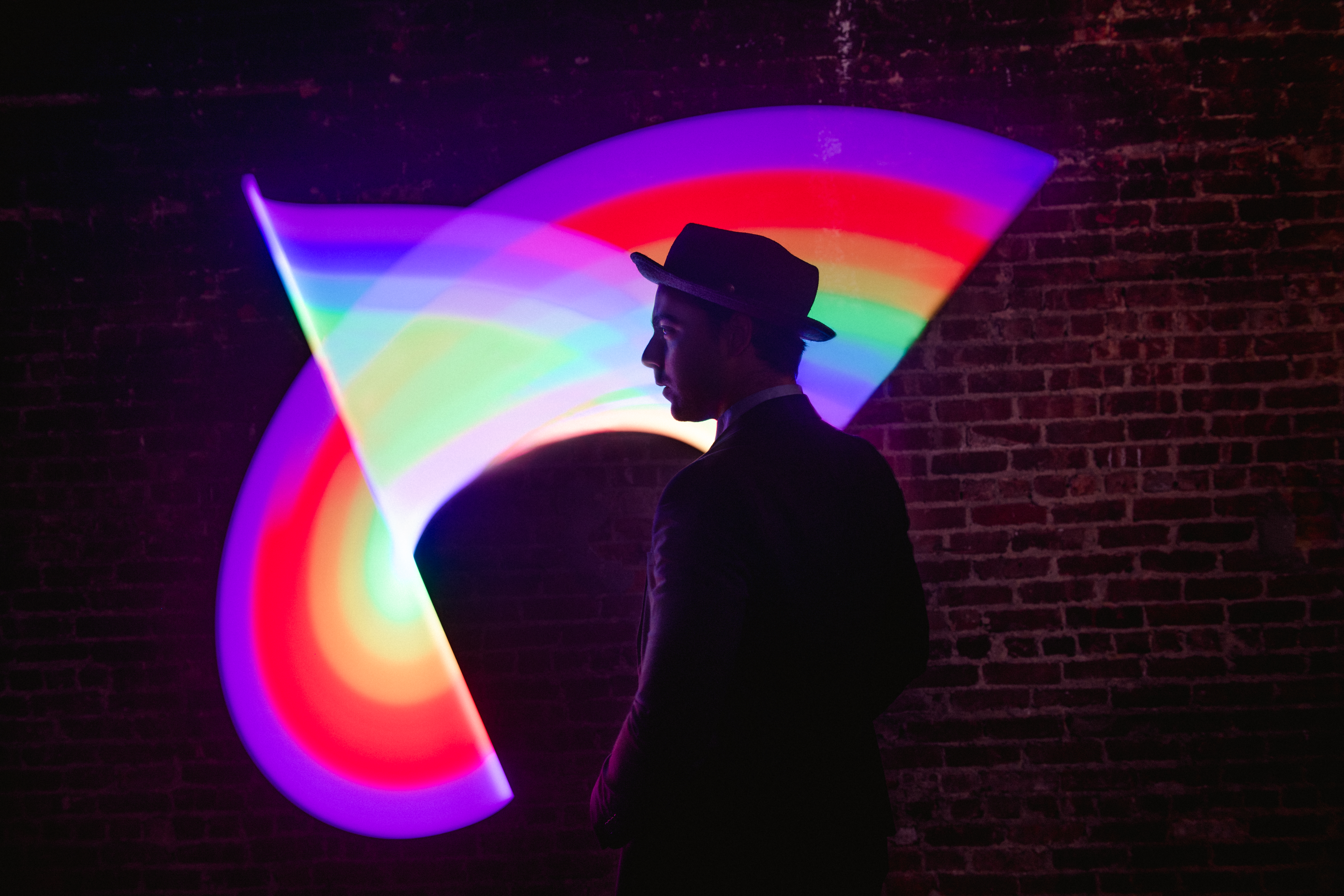 Have you tried Nanlite’s PavoTube II X-Series? Share your experiences in the Comments section, below! 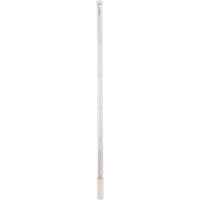