If you’ve ever seen a “video village” on a set, you understand how quickly cables and monitor equipment fill the area, making it hazardous, not to mention limiting to a single area where you can pile people up to see the shot. And then there’s the wire nest that piles up around the camera, requiring multiple people to be huddled around the camera to set up a shot, making it necessary to have wired monitors close by. The cinematographer, AC, AD, focus puller, gaffer, and, of course, the director all have to check out how the lighting and framing are set up for the scene.

When wireless video transmitters were introduced, they provided a new and revolutionary way to monitor a camera shot. Not only does a wireless system cut down on the amount of wiring involved, but it also allows multiple people to monitor shots from anywhere on the set, and to monitor from areas farther away from the camera than before. It can be used for:

When looking for a wireless system for your own production, there are a few points to look for (other than price), such as:

Wireless transmission systems are measured in maximum guaranteed line-of-sight transmission distance. For example, the Teradek Ace 500 has a 500' line-of-sight range to a Bolt receiver. These long distances are great for when you are working with cameras that are in hard-to-access locations such as on jibs, cranes, car mounts, drones, and RVs.

Keep the distance in mind when considering what the guaranteed line-of-sight distance is, because the signal will be degraded if you have walls, landscape, or other obstacles between your transmitter and receiver. Latency is also an important spec to consider if you are working with high-resolution video, so you don’t lose quality when you need to monitor high detail in your shot.

Many professional transmitters have the capability to transmit to multiple receivers simultaneously; for example, Teradek's line of Bolt 4K 1500 transmitter/receivers support transmission to up to six receivers, so you can simultaneously send video to your focus puller, director, and AC, as well as a producer sitting off set. The Hollyland Mars 400S PRO transmission system allows you to transmit up to 1080p video to four smartphones or tablets via Wi-Fi or two devices and one receiver from up to 400' away. Many transmitters and receivers are compatible with different models within their company lines, allowing you to mix and match transmitter/receiver pairs based on transmission distance, resolution, and encryption support.

You can also utilize a monitor with a built-in module or one that is designed specifically to mount onto a monitor, such as the SmallHD line of monitors, to avoid additional mounting gear. The SmallHD 7" monitors, such as the 702 Touch and Cine 7 are compatible with wireless connectivity so a director can roam around the set with the monitor using handles, or the focus puller can remain comfortably in their own area when the set gets crowded. SmallHD also offers Bolt 4K wireless modules individually to add to the monitors if they weren’t purchased in a kit.

Most professional transmission systems on the market right now support input and transmission up to 1080p60, and many support HDR workflows that will suit your visual needs and the requirements of most portable monitors. There are some systems, such as the Bolt 4K series, that both input and transmit up to 4K video without any loss of quality, so you can ensure you are viewing the highest-quality images on your monitor.

Other handy features supported by many pro systems with HDMI and SDI inputs and outputs are cross-conversion and loop output if you need to input from one connector type and output to another. Loop output allows you to output a wired video signal right from the transmitter, such as the HDMI loop out on ikan's Blitz Lite 300, while sending a wireless transmission to the receiver, enabling you to use a monitor close to the transmitter, as well as one attached to the receiver.

Power options are also versatile, and many manufacturers will sell transmitters and receivers with optional battery plates, allowing you to choose your own so it fits into your setup with pro power options you may already own, such as high-capacity V-mount or Gold mount batteries. Mounting the transmitter and receiver securely is a snap, because most units will feature industry-standard 1/4"-20 and/or 3/8"-16 standard threads to mount on a director's cage, follow focus rig, or camera extension, and they won’t take up too much extra room or add too much weight to your setup.

Low-budget, mid-budget, remote location, and run-and-gun productions now have the ability to match the capabilities of larger, big-budget productions by allowing them to untether from the traditional wired set and allowing the director, AD, or focus pullers to roam free while monitoring shots. Removing the wires where you can is always a plus.

Have you made the switch to wireless video monitoring? How has it worked for your productions? Let us know in the Comments section, below. 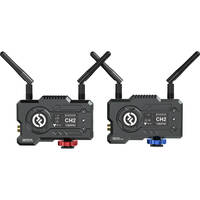 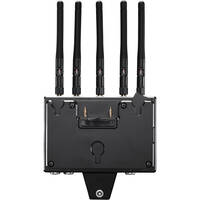