3 Pro Monitoring Headphones That Are Great for Listening to Music

Most of us spend a ton of time at our desks working, and if you’re a music lover, as I am, there’s a good chance you rely on your favorite tunes to help you make it through the workday. As someone who works in pro audio, comfortable, isolating, great-sounding headphones that don’t tire my ears are essential to the work I do. But, even when I’m not editing a podcast or mixing a song, I still usually have my headphones on because I’m listening to music while writing articles or emails. So, in my years as an audio engineer, as well as a writer, I’ve learned that the studio headphones I use for my audio work are also great headphones for listening to music or talk, as well, especially during extended listening sessions. In fact, I prefer them to many high-end consumer and HiFi headphones if I’m sitting at my desk all day.

Here’s my reasoning. In general, professional studio monitor headphones have a comparatively flat frequency response versus consumer audio headphones. Manufacturers design studio headphones in this way, because ideally, when you’re recording or mixing voice and instruments, you want the frequency response of your speakers to be as neutral as possible, so as to preserve the program material’s true sound as best as possible. A secondary benefit to a “flat” frequency response is that it’s less tiring on your ears to listen to relatively balanced program material for extended periods than it is to listen to audio that has had its bass and treble boosted significantly, which is exactly what many consumer audio headphones tend to do.

Another reason I love studio headphones is that you can get a great-sounding pair for minimal money when you compare them to some of the higher-end consumer headphones, as counterintuitive as that may seem. So, if you’re the kind of person who listens to music, radio, podcasts, or anything else at your desk all day, and you’re in the market for headphones, take a look at these professional studio headphones that are great for everyone.

I think it’s fair to call the Audio-Technica ATH-M50x Monitor Headphones a modern classic. They have an excellent high-end frequency response, but don’t tire the ears, which makes them suitable for extended sessions, whether you're producing music or just listening to it. They also manage to isolate very well and do a fine job at blocking distractions from the outside world, which again can be very helpful when you’re trying to work. Another plus is that unlike a lot of studio headphones, they use a relative low impedance of 38 ohms, which means they’ll sound good when listening on consumer devices like phones and computers.

Now, if you can’t part with the idea of wireless headphones, and don’t mind spending a bit more money, you’ll be glad to know that Audio-Technica has also introduced the more consumer-centric ATH-M50xBT Wireless Over-Ear Headphones, which feature strikingly similar specs to the ATH-M50x, but sport full Bluetooth capability, as well as a built-in microphone and controls for calls and voice commands.

Giving you the best of both worlds, the ATH-M50xBT phones also have a 3.5mm jack and include a detachable 3.9' audio cable. So, if your battery runs out, or your sound source doesn’t support Bluetooth, you can easily “go wired” without sacrificing the ability to control your music or make hands-free calls.

If you’re interested in headphones that won’t tire your ears and are comfortable enough to wear all day, but really can’t afford to spend a lot of money, the Sony MDR-7506 headphones are an appealing option. Even though they have an impedance rating of 63 ohm, which is a bit higher than the Audio-Technica offerings above, I’ve never had any problems driving them with any iPhone I’ve ever owned. Unfortunately, Sony doesn’t offer a Bluetooth version of the MDR-7506, so you’ll need to use an adapter to connect them with your iPhone or Android if it doesn’t have a headphone jack.

If you’re the kind of person who listens to music for hours upon hours, whether it be for work or otherwise, a pair of headphones with a relatively neutral frequency response is something you may want to consider. On top of them being less of a strain on your ears than consumer headphones that are “sweetened” to have boosted bass and treble, many people, including me, prefer to hear the music as it was originally intended. Thanks for reading, and please feel free to ask any questions or leave any comments in the dedicated section, below. 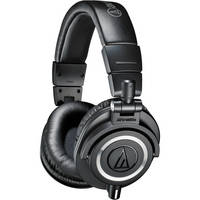 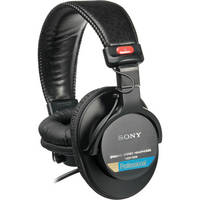