Mackie Onyx 12 Is Its Own Little Gem

Years ago, I worked at an alternative country bar doing sound for a wide variety of acts in their backroom. We had country bands, folk duos, metal acts, jam bands, theater troops, and circus performers.

Every one of them had to suffer at my hands: All we had was a cheap analog mixer teetering on the edge of failure. Mackie’s new take on its Onyx 12 Analog Mixer would’ve been a fantastic board for the place.

This review comes to you in the late summer/early fall of 2021—a time when live concerts are trying to make a comeback, but not for me; I’m a hypochondriac at the healthiest of times, so I’ll be testing this board in the comfort of my home studio. Still, we’ll put it through some revealing tests at home and see what we find.

First, Let Me Describe the Mixing Board

As you can see, the board gives you 12 channels of inputs, each with faders, aux channel sends, FX sends, and an EQ.

Here’s a picture of the back, so you can get an idea of its veritable panoply of connection points.

Basically, you’re covered for multiple small live band setups. You can easily mic basic drums, vocals, and Hi-Z instruments (electric bass or guitar). You could accommodate a hardware sampler, a stereo laptop feed, some keyboards, and a couple of DI boxes, too.

You also get an auxiliary input that can accommodate Bluetooth. Bluetooth is super easy to pair, by the way. In no time at all, I had my iPhone connected to the board, pumping music through the main outs and the headphone outs.

Speaking of Outputs, the Board Is Quite Clever in that Regard

You get your main outs, your headphone out, your control-room outputs, and two monitor outputs for stage fills (great for helping the drummer hear the vocals, for example). Mains and control room output groups get their own volume controls, which is quite handy. Monitor outputs are fed by two aux knobs per channel, pictured here.

Mackie has a few clever ways to pump even more outputs out of this unit if you so choose. Direct your eyes to the Insert connectors.

The nominal purpose for this connection is to help you loop your favorite outboard processors into the signal path. For instance, I have a DBX 166 compressor that sounds killer for live guitars and basses. With the appropriate Y-cable, I could patch that compressor to any channel right after the gain pot and low-cut filter, and compress the heck out of that instrument before it touches the EQ.

All well and good, as long as you have a Y-cable.

Now, what the manual tells you—making a great case for RTFM—is that you can use these insert points as mirrored, direct outputs for their corresponding channel.

So, you can have some real, experimental fun routing signal if need be. You could also use the Effects Output jack in this regard. Sure, it’s supposed to feed outboard effects processors—which is a fantastic feature for the price. But you can also use that out to route your feed to another device if you wanted to.

Yes, you are a bit constrained there, since any sound you push toward the Effects Outputs jack will be post-fader—meaning, the signal will mirror the board’s volume and EQ settings completely.

Also, should you try this unconventional routing scheme, you’d have to forego the unit’s built-in effects.

Hold on, the Unit Has Built-In Effects?

Of course it does! After Mackie's customers raved about built-in effects in their ProFX series, the company decided to add some wet goodies to the Onyx line.

Delays, reverbs, chorus, and flangers are all on hand. You can even save and store up to six presets, so you don’t have to fiddle between gigs. You can only load one effect at a time, except in cases where the unit offers you two effects in one, such as the delay+reverb setting.

So, no, you can’t flange channel 1 and reverberate channel 2. But in the live-band or house of worship context—for which these mixers are best suited—would you really want anything besides reverb or delay?

Nine times out of ten, I wouldn’t. That tenth time would be if I wanted to have some fun with the band, messing with them during a witty moment of banter. I would almost never do this, unless the band were my friends.

Here’s something I would do, however, when working with a band I like: I’d want to offer them the ability to take home a board recording of their set—and the Onyx 12 offers a couple of different ways to do that.

The board lets you record the stereo mix straight to an SD card plugged into the mixer, or multitrack signals over USB to your DAW of choice.

If you choose the SD card method, all you need is a properly formatted SD card, and you’re good to go. Changing the time stamp and naming the recording is easy with the built-in menu buttons. If you can’t figure it out, the manual helps in plain language. By default, the SD card records in studio-quality 24-bit / 96 kHz specs.

I can see this coming in handy not only for live gigs, but for house of worship archives (streaming and broadcasting services is more and more common these days), as well as for rehearsal recording, or even for a podcast backup.

Because yes, you can use this device as a mixer-recorder for podcast recordings—particularly in-person large-panel shows, where you’d need more than four mics.

In fact, the board has a couple of things to recommend it for such circumstances―its mic preamps, for instance, are strong enough to power the gain-hungry Shure SM7B microphone without introducing hiss. No Cloudlifter is required here: The mic sounds clean and strong, as evinced by this sound bite.

And though the Onyx 12 doesn’t offer individuated headphone outputs like more purpose-built options from Zoom and RØDE, it does have multiple outputs that could easily feed any number of cheap headphone distributors.

Would it be the absolute best device for recording multi-tracked podcasts? No, mostly because the mixer doesn’t provide easy options for patching in remote guests without extra cables. You’d think that between Bluetooth pairing and bi-directional USB capabilities, there’d be a way, but there isn’t: Bluetooth comes over the main mix outs, so you’ll get a 2-channel mix if you go that way, and you won’t be able to edit. You could hard-patch a phone or computer into many of the channels, but that would require separately available cabling.

Using the bi-directional USB capabilities could work, if I could get Zoom, Skype, or other VoIP software to talk to the individual I/O of the Onyx, rather than the Onyx as a whole. At present, I’d need a companion app such as Loopback to make virtual guests work.

Such is life—and sometimes life is ameliorated by firmware. Hint.

But How Does It Sound?

Well, you tell me!

You previously heard my voice in an untreated room. Here’s me, recording my voice in my treated home studio, singing along with an electric guitar. This performance was multitracked to my DAW.

Sounds clean, dry, and in the case of my guitar, DI’ed. Let’s see how the unit handles a DI’ed bass.

Again, sounds clean—which is all I need it to sound.

I should note that I’m recording only the preamp in those previous instances, straight into my DAW via USB. The mixer can offer 12 tracks of simultaneous instrument or vocal recording to computers, and it also gives you the ability to record the main output—post EQ, post fader, and post effect—over channels 13 and 14.

Because of that cool feature, I can simultaneously record dry signal and processed signal on an instrument, so you can judge how it sounds. For instance, here are some clean guitars.

And here’s the same music, only we’re using the Onyx’s 3-band Perkins-style EQ, and some stereo hall reverb.

Finally, we’ll return to the spoken, human voice to show off more of the EQing and effects capabilities.

It’s important for me to tell you who I think this board is perfect for, and who it might not suit.

If you’re looking to get into podcasting, the board will work fine, but again, there are more suitable options out there. I definitely love the preamps for podcasting, but I wish looping-in remote guests were easier. Then again, Mackie never said this board was intended for podcasting, so I can’t really fault the company.

If you only need a multichannel USB interface for recording or mixing, I’d probably advise against the Onyx, as well. This isn’t a matter of quality but of layout and intention: More purpose-built interfaces exist in that space from lots of vendors—including Mackie.

Obviously, this board is perfect for small, intimate venues, houses of worship, rehearsal rooms, and personal practice spaces. But more than that, I’d like to make a pitch for the Onyx board as a gift for the budding engineer in your life.

Imagine a kid in a small town—a child who loves sound. Not music, per se, but sound: tinkering with it, figuring out how to route it from place to place, learning the basics of signal flow. Someone like SOPHIE, rest their soul.

A kid like that would love this board; they could grow with it, learn from it, and take it with them to various projects—setting up their band in the garage, mixing a coffee-house performance at school, and then graduating to recording projects with insert gear, or setting up cue mixes.

Really, I’m speaking to myself as a child: If my folks had gotten me this, I could see 16-year old me being very, very, very happy.

What excites you about the Mackie Onyx 12? Is it anything I mentioned, or something I left out—like the way each Onyx comes with Pro Tools | First and oodles of plug-ins? Let us know in the Comments section, below.

I bought this mixer solely for home recording since it is advertised that it comes with home recording software and is multi track capabilities. You said you wouldn't recommend it for that, why is that? As I am still trying to figure this thing out, I am having trouble getting much of a signal to the board when I plug directly in, is there a trick to doing that?

Royce, when you say “plug-in directly in”, are you referring to a guitar/bass? If so, you’ll need a direct box to bring your Lo-Z signal up to the appropriate level. Just search this site for “direct box” and you should find several options. I’d probably start with Hosa or Wirlwind, to get my feet wet.

Correction: I mean “HI-Z”, not Low-Z. Also, after zooming in on the picture, I see that the first two channels seem to have a HI-Z switch. Press this if connecting a guitar/bass directly.

I could use this mixer to individually process each channel with effects from my daw (ableton) and send them from the main mix of the mixer to my speakers?

Can you record a single guest as a podcaster? This device (the 8 channel version) will replace 3 pieces of equipment on my desk but if it can't record me and one guest, seems like it wouldn't be a good fit.

The Mackie Onyx12 offers 8 microphone preamps that will allow you to record both you and your guest. 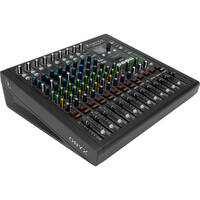 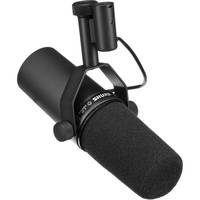