When asked by my best friend what things I’d collect if money wasn’t a concern, I replied, “Not cars, not guitars, not VHS tapes of old movies, and definitely not those weird little Furbies. I’d amass loads of headphones like a fiend. I love headphones, man.” So, my collector spirit animal was thrilled to find out Shure was shipping some new headphones—the SRH440A and SRH840A—to B&H for sampling and review.

The SRH440A and SRH840A are updated takes on the long-popular SRH440 and SRH840 models, and they have enhancements in some key areas.

Externally, there has been a significant visual redesign that is not just aesthetically beneficial, but also an improvement in durability. For starters, the new lack of exposed wires means you can no longer unintentionally pinch, pull, or snag the vital audio connection running from the earcup into the headband. The underside of the headband sports generous cushioning and a textured fabric covering, so it should be more resistant to tears and peeling than the leatherette material used on many headphones.

Another thoughtful change is the position of the cable input port on the left earcup. Rather than pointing straight down as it did on the previous models, it is now angled forward to keep the cord away from the top of your collarbone.

What you can’t see are the tweaks Shure made to the performance. Though they have the same driver size (40mm) and frequency range specs as the prior versions—10 Hz to 22 kHz for the SRH440A and 5 Hz to 25 kHz for the SRH840A—their frequency responses or tonal curves are different from the past models. Additionally, the sensitivity is now a smidgen lower (97 dB/mW versus 102 dB/mW), as is the impedance (40 ohms versus 44 ohms).

With even more in common than before, the SRH440A and SRH840A are both great headphones. Apart from the SRH840A’s use of goldish threading on the headband and glinting gold accents on the earcups, they look identical. They strike me as being reasonably sturdy without venturing into military-grade, combat-ready territory, and they feel lightweight without seeming “cheap.”

Both come with the same 9.8' straight oxygen-free copper cable, which securely locks into the left earcup and has a gold-plated 3.5mm TRS plug (a 1/4" adapter is included, of course). Considering the length of that cable, I’d favor these cans for home/studio/stage use rather than for active lifestyle audio companions; that’s where wireless headphones come in.

The earcups on these headphones tilt and rotate, not only ensuring a great fit in myriad positions on a variety of heads, but also allowing them to fold flat for compactness in storage and transport. Note that the SRH440A model ships without a carrying bag, while the SRH840A includes one.

Being closed-back, over-ear headphones, the SRH440A exhibit excellent passive noise isolation. For comparison, I sat in my living room and donned my AKG K371 cans as the dishwasher chugged away in the kitchen. When switching between the two headphones, I found that the SRH440A kept out more of the highs, which is great news for anyone who has to deal with non-studio realities such as noisy air conditioners, refrigerators, and radiators.

The Shure headphones also have a slightly stronger clamping force than my K371. That’s a perk for me because I wear glasses and still want a proper seal; thankfully, the extra squeeze didn’t get to the point of compromising comfort even after wearing them for hours straight.

Although I know the K371 headphones aren’t as ubiquitous as Beats, I quite like them as solid, all-around performers. Switching between the AKGs and the SRH440A while listening to a range of audio sources, I found the 440As to have slightly thinner low-mids (or the K371 low-midrange was a bit thicker), more present trebles, and increased bass output.

The midrange quality of the SRH440A is particularly well suited for dialogue-heavy content such as podcasts, audiobooks, and movies. Voices peek out nicely, never being overwhelmed by boominess from microphone proximity effect or by the hyped bass that often resides in movie trailers. Since music also sounds nice on the SRH440A, they’re appropriate for production and casual use.

It only took about 10 seconds of listening to a familiar tune through the SRH840A to conclude that I REALLY like these headphones. They make songs seem like chocolate-coated caramels… delicious and easy to consume. In fact, about 50 songs in, I was still saying to myself, “Just one more track.”

The SRH840A cans have the same passive isolation and clamping force as the SRH440A, but a different sound profile. The sonic signature of the SRH840A is smoother, more balanced, and more refined. A prominent exhibit of this was made by the wide timbral spread of the verses in “Oh My,” by Natalie Prass, and the choruses in “Loud(y),” from Lewis Del Mar.

Bass is beautiful and round, wonderfully displayed by the massive 808 hits, low piano, and grainy synth on “Hærra,” by Ásgeir, and by the resonant kick and perfect standup bass on “Polly Come Home,” by Robert Plant and Alison Krauss.

In Nick Hakim’s “Pour Another,” details such as billowing reverb and gentle amp hiss were intact, while the live cut of “A Taste of Honey,” from Paul Desmond, showcased the SRH840A’s ability to reproduce nuances like the pick attack of the opening guitar line and breathy spit from the sax track.

Soundstage accuracy from far left to right was fulfilling on delicate tracks like Alohaha’s “Side A” and the stereo version of “Doralice,” by Stan Getz and João Gilberto, both songs having precise placement of elements such as hi-hat, guitar, and vocals.

When it came to challenging textures, transients, and LOUD NOISES, the SRH840A handled them all without choking. From taming the aggressive, almost-saw-like sound of Aesop Rock’s voice on “Cycles to Gehenna” to keeping Anderson .Paak and Rick Ross balanced on “Cut Em In,” vocals were solid. Likewise, the electronic onslaught of Carpenter Brut’s “Leather Teeth” and the crisp, edgy tones on Polyphia’s “O.D.” were pulsing, grooving, and impactful.

After perusing a bushel of mastered and released songs, monitoring old tracks I’ve mixed, and fiddling with new mixes, I can say that I fancy the SRH440A for speech-centric material and the SRH840A for music-heavy content. Honestly, I wish I could take a pair of the new SRH840A into the past and start over.

Keep in mind that selecting headphones is a very personal decision, like choosing a hairstyle, and the “sound” I like may not align with your preference. However, both of these Shure SRH models are seriously worth your consideration.

Let us know in the Comments, below, what headphones you’ve used and what you think of them. 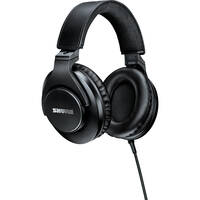 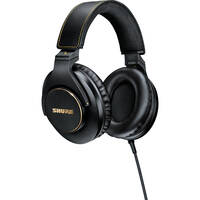