I’ve been a fan of Novation since the early 2000s when the company released the virtual analog Nova series. To this day, I still own and love my Nova desktop synth. When I was asked if I was interested in writing a hands-on review of the Novation Peak, I couldn’t say no. The Peak is a hybrid 8-voice analog/digital synthesizer. There are pros and cons to both analog and digital technologies, and the Peak provides the best of both worlds. The digital oscillators, modulation, and effects provide exceptional power and control, while the analog filters, VCAs, and distortion provide warmth and character. We’ll get into the nitty gritty in a bit, but for all those who dismiss “digital” as sounding thin, harsh, or brittle, the Peak synthesizer is analog where it counts, and it sounds wonderful.

The Peak’s all-metal enclosure with wooden ends makes for a substantial and professional-feeling instrument. The knobs, buttons, and sliders all feel excellent, with no wobbly shafts or suspect qualities. A large OLED screen features a black background with white script, making for a display that’s easy on the eyes in any lighting conditions. I also appreciate the amber-colored LEDs used throughout, which help you quickly see what’s happening without being obnoxious or distracting.

The Peak synthesizer offers a standard layout with three oscillators per voice, multi-mode filters, and voltage-controlled amplifiers. For modulation, there are three ADSR envelopes, one dedicated to the VCA and two assignable Mod envelopes. There are four LFOs total, with two available from the front panel and two available within the LFO submenu. The mixer section includes level controls for each oscillator plus noise, ring-mod, and VCA gain. Other notable features include Glide, Arpeggiator, Animate, and Effects, which include distortion (pre- and post-filter), chorus, delay, and reverb.

The Peak is packed with one-to-one controls with the 40+ knobs, buttons, and sliders, allowing you to dial-in a custom patch quickly and efficiently. The menu section above the display allows you to deep-dive into sections without too much fuss. I appreciate the three soft buttons next to the display that allow you to access and adjust parameters quickly without forever scrolling through pages. The menu features quick access to Patch, Osc, Env, LFO, Arp/Clock, Mod, Voice, FX, and Settings (global). There are also dedicated patch buttons for Initialize, Compare, Audition, and Save.

At the heart of the Peak beats a Field Programmable Gate Array (FPGA), a single processor with advanced capabilities that runs circles around traditional DSP chips. From oscillators to the modulation matrix, the FPGA goes far beyond standard DSP with its 24 MHz oversampling, which enables optimal waveform generation without any noticeable aliasing or digital artifacts, even with extreme pitch modulation. The FPGA opened the door to a new type of oscillator design for Peak―The New Oxford Oscillator―which employs two waveform-generating techniques: Numerically Controlled Oscillators (NCOs) and wavetables.

The NCOs generate standard “analog waveforms” such as sawtooth, square/pulse, triangle, and sine. A huge benefit of the NCO-generated sawtooth is the ability to multiply it and detune it, making a thick, harmonically rich “triple-saw.” There are 60 designed wavetables with five waveforms each. Utilize the “Shape Amount” knob to morph between the waveforms. The Shape Amount also controls the pulse width and saw shape on the traditional waveforms. Each oscillator can be synced using an “invisible” virtual oscillator for creating classic sync sounds without the need to sacrifice an oscillator. The benefit of the NCO is that the oscillators will never go out of tune. However, analog oscillator drift is the secret mojo of analog synthesizers, often attributing to the instrument’s character. Fortunately, the Peak kept this in mind and implemented the Drift and Divergence parameters, which mimic the response of imperfect oscillator drift.  At extreme settings, it became almost unusable, but with the right amount you can coax a very convincing analog sound and behavior.

Filters have a huge impact on the sound and character of any synthesizer. Peak’s 100% analog multimode filter is based on the Bass Station II filter, but with increased resonance and adjustable key tracking. The filter can be switched from low-pass, high-pass, and band-pass modes with a choice of 12 dB and 24 dB/octave roll-off slopes. LFO 1 and Osc3 are hardwired as modulation sources with their depth accessible directly from the filter section. The “Env Depth” control applies modulation from the Amp or Mod 1 envelope. The filters can also have the same Divergence applied as the oscillators, for subtle random offset per voice.

One of my favorite features on Peak is the Animate function. There are two buttons that work in momentary or latched modes, which can be selected as a source in the modulation matrix with up to 16 simultaneous routings per button push. This allows you to change the sound of a patch drastically with the press of a button. One can also use pedals to trigger the animate function. In practical use, it really became the shining star for fast, accurate changes. I loved using it to change LFO rates rhythmically in a four-bar phrase.

The onboard arpeggiator offers seven modes with adjustable gate length and a six-octave range. If that weren’t enough, Novation also included 33 rhythmic variations, variable resolution, and swing, which can be synced to internal or external MIDI clock. I had a lot of fun generating patterns. The rhythmic variations added another dimension to this instrument. I could always find something interesting that complemented the groove on which I was working. 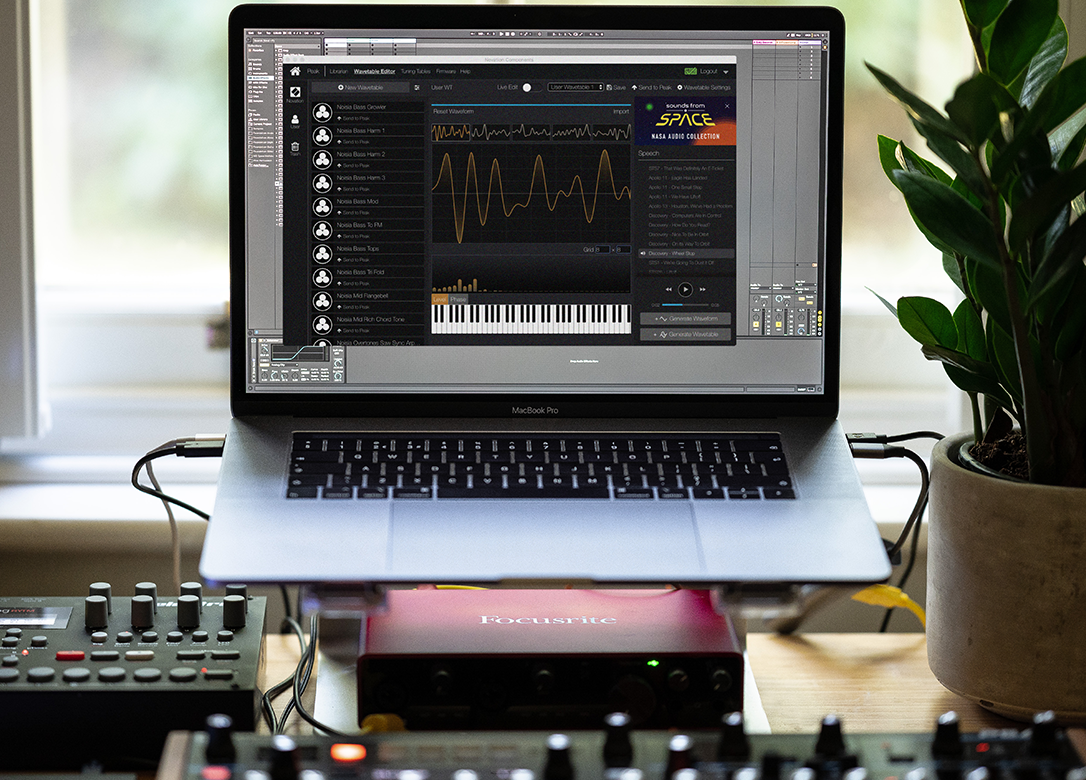 The digital effects section is governed by the FPGA, which runs at a sample rate greater than 90 kHz, which is notably higher than most onboard effects of any synthesizer. The chorus, delay, and reverb sound fantastic. The reverb sounds especially impressive with its incorporation of modulation and filtering, which provides a lush and expansive sound. As I was finishing up this article, a new firmware update became available, which added new stereo spread modes, new modulation destinations, and new effects―including new chorus modes with flanger and phaser tonalities. Also added was a new lo-fi delay for a vintage tone. I didn’t get a chance to experiment with the new additions, but it can only be icing on the cake.

I’m a bit of a Novation fanboy since I love the Nova/Supernova virtual analog line. In fact, I still use my trusted Nova desktop, so I was curious to compare them. The Peak offered a definite bump in quality, especially with the effects. Overall, I found its sound capabilities fit nicely between my Moog Subphatty and my vintage Roland SH-09. The new Oxford oscillators offer plenty of choices, especially with the added wavetables. I certainly took advantage of the Drift and Divergence parameters to coax some vintage analog vibes in my productions. I used to own an Alesis Andromeda, which was a 16-part all-analog behemoth. It had an automatic self-tuning mode, which kept the oscillators in check. You could defeat the self-tuning and it would drift over time, but you had no control. Eventually, the drift became unusable, and you had to recalibrate and start over from scratch. The Peak’s method of manually adjusting the drift and divergence is they way to go. 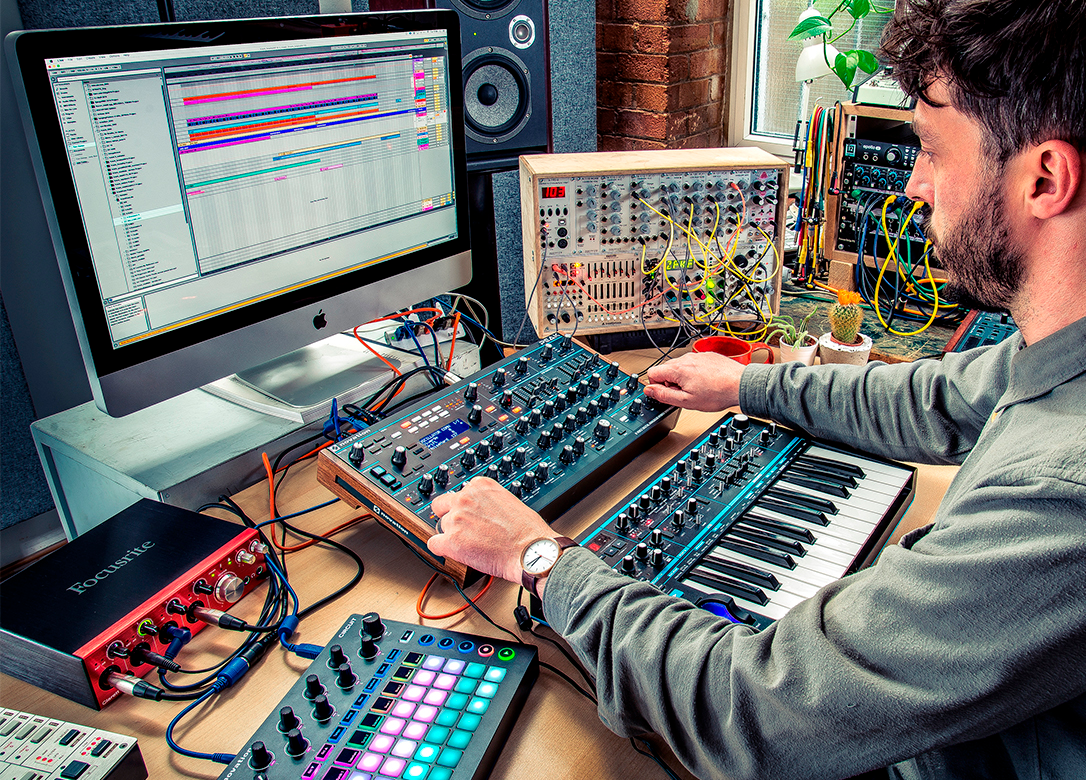 I wrote a little track using only the Peak. Except for the breakdown where I added some additional effects, everything is from the Peak. I found the instrument to be very flexible. I was able to coax just about any sound I could think of. The kick and snare sounds were quite usable. I’d probably layer in some additional drums, but the synthesis engine is in no way deficient. The sub bass and other synth patches were clean and clear with plenty of depth. The synth sound after the breakdown utilized the arpeggiator to great effect. I wound up using a bit of EQ, to get everything to sit, but overall, I didn’t have to do much. Using my DAW to record knob movements and filter sweeps and play them back was easy as pie. Everything seemed straightforward and easy to manage. I didn’t even have to crack the manual to get things going.

A firmware update became available while I was evaluating the Peak, which offers numerous enhancements, features, and upgrades. I’m happy to report that most of my gripes have been mitigated and almost everything I had wished for has been addressed. Some of the big features/upgrades include a pan control for the Voice menu, which lets you place the synth patch within a stereo panorama. There are also three new stereo spread modes, which can place each voice to a different pan setting. This is most excellent when used in conjunction with the arpeggiator. Delay stages have been added to Amp, Mod1 and Mod2 Envelopes. 11 new Mod Matrix destinations have been added for a total of 48. The Animate controls also received attend and release envelopes for better expressive control. The Effects section has been overhauled, offering some new and exciting options, such as new Chorus modes, which include Flanger and Phlanger effects, as well as Lo-Fi delay modes that are longer in length with a grainy texture. There are also FX Mod destinations offered, which allow you to control a lot of effect parameters via the Mod Matrix. Noise has been added as a noise source, which may sound banal, but it offers a ton of creative options. Used in subtle amounts, it can really add to a patches “analog” character without the loss of control. Novation even added a probability option to the arpeggiator, which really makes for some interesting pattern effects.

I really enjoyed my time with the Novation Peak. I think it is an asset for anyone looking to add an analog synthesizer to their setup. The FPGA processing really adds a noticeable touch of quality throughout the instrument. The oscillators sound full and rich, while the filter provides all the analog character you would need. I discovered a free Wavetable Editor available through Components, which is a free software utility available on the Novation website. With it you can import your own wavetables or draw your own oscillator waveshapes! It even includes some space-themed audio from the NASA sound library, as well as content from A-list producers NOISIA. My only wish is that the Filter LFO 1 depth and the Filter Env depth be added to the mod matrix—something that can easily be added in a firmware update and would not impede my decision to pull the trigger on such a wonderful instrument!

As I stated earlier, the Peak easily sits between my Moog and vintage Roland synths. This would be a fantastic first synthesizer for someone starting out. The Peak is easy to navigate and understand, with access to deeper controls with just a few clicks. For the seasoned producer, sound designer, or synthesist, you’ll find that you have everything you need to create just about any sound imaginable with ease and finesse.

What do you think? Is this synth for you? Crack on in the Comments section, below!