With more and more companies offering CD-quality streams, hi-res tiers, and lossless audio options, the temptation to reserve a bit more of the paycheck for pleasurable listening is greater than ever. Apple, Amazon, Tidal, Quboz, Deezer, and others have concluded that giving music lovers extra fidelity is a worthwhile endeavor, a move that is generally applauded by industry professionals and “normal people” alike. However, before you shell out various monies on high-quality streaming services, make sure your hardware (physical devices) can perform on that level. Analogized to video, “Don’t pay extra for high-definition movie rentals if your old TV can’t go beyond standard definition.”

In case you’re not quite sure what the buzz is all about, a brief look at the past will help you understand the present. Long, long ago, in a world that existed before the Internet, people’s music collections existed only on media such as CDs and vinyl records, which set the standard for the level of sound quality listeners came to expect. After the birth of the Internet, it became possible to meet the demand for more convenient music consumption, thanks to downloadable files, miniscule MP3 players like the iPod, web-based feeds, and, of course, smartphones.

There was (and is) a problem, though… online content that maintains the quality of records and CDs uses a lot of storage space (for files) or network bandwidth (for streams). Since consumers largely prioritize convenience over quality, some very clever people came up with ways to significantly reduce the file size and bandwidth requirements for music, but at the expense of the sound quality. Early file types like the MP3 permanently discarded some of the sonic fidelity through a process called lossy compression; it made the files smaller (faster to download and easier to stream) but also sound worse than their vinyl record and CD counterparts.

As Internet speeds increased and device storage limits expanded, it became more reasonable to return the focus to quality without significantly sacrificing convenience. Now, it is possible to download ultra-high-resolution files (better than CD quality) and subscribe to music streams that utilize lossless compression to avoid compromising the audio’s integrity. With those being readily accessible, it’s time to make sure that every part of your “signal chain” is up to the task.

Start at the Source

To start enjoying lossless audio, you first need a source that provides it. Apple Music now has a selectable lossless setting (assuming your device’s OS is appropriately updated), Amazon Music Unlimited includes its HD music library, Tidal provides various sonic tiers up to its premium MQA (Master Quality Authenticated) ultra-high-res goods, Deezer has a CD-quality plan, Quboz offers studio-quality content up to 24-bit / 192 kHz, Spotify intends to release lossless streaming soon, and the list goes on. Each service has its own ups and downs, but going through them would be a distracting detour from the point of this piece. So, on we go to the next stage.

Get a Good DAC

After you settle on a lossless audio source, turn your attention to the DAC (digital-to-audio converter) because its job is to turn the digital content from your selected streaming service into something you can actually hear. Sure, laptops and smartphones have built-in DACs, but audio performance was not at the forefront of their design. Even Apple officially recommends an external DAC for any files/streams over 48 kHz. Just so we’re clear, the DAC sits between your “device” (computer, smartphone, or tablet) and your “monitoring system” (speakers or headphones).

Understanding that, you’ll probably want to purchase a solid DAC that can do the music justice when converting those lossless digital bits into analog signal for your speakers or headphones. From ultracompact, travel-friendly models like the FiiO Q1 Mark II and the Astell & Kern PEE51, to larger desktop pieces such as iFi AUDIO’s Zen DAC V2 and the Cambridge Audio DacMagic 200M, the options are many. If you intend to use Tidal’s top-shelf MQA files, verify that the DAC features MQA support.

I know it would be easy and lovely if you could just pop on a pair of wireless headphones and revel in the fabulousness of lossless audio, but we aren’t quite there yet. The current technology utilized in wireless headphones/earphones is Bluetooth, which does not support lossless formats. We can hope the future will reveal a better wireless solution, but until then, use wired connectivity to headphones. The same applies to speakers, with the notable exception of AirPlay. AirPlay-capable systems are able to handle lossless audio, but limited to the lowest form of it at 16-bit / 44.1 kHz. So, if you stream a 24-bit / 192 kHz file over AirPlay to your stereo system, it will be down-sampled to 16-bit / 44.1 kHz. Still, that’s better than Bluetooth and MP3.

That brings us back to the DAC. With your smartphone/computer plugged into the DAC and the DAC connected to your speakers/headphones, you may begin marinating in the luxury of lossless audio streamed from your preferred service. Whether bumping tunes through speakers or headphones, it’s in your best interest to rely on models built for premium sound reproduction.

Although their frequency response limits don’t tell you exactly how they sound, it’s a fair point to consider. For example, speakers spec’d at 75 Hz to 18 kHz can’t play bass as deep or treble as high compared to speakers that can do 40 Hz to 20 kHz. Imagine the trauma of trying to hear music at its fullest resolution, only to be smacked down by the narrow bandwidth of inadequate transducers. If you’re like most people, you treasure the low-end territory of music, filled with pulsing kick drum, rumbling bass, and bombastic synths. So, don’t rule out the addition of a subwoofer to handle the big bottom.

Those who’ll be sticking to traditional headphones (not earphones) should be informed of important differences between closed-back and open-back designs. Closed-back headphones are made to isolate you from background noise, whereas open-back headphones let in a flood of ambient sound.

Even if your entire playback system is primed to give you the full lossless audio experience, you and your environment may not be ready. The room in which you’ll be listening can substantially affect what you hear, especially when playing audio through speakers or open-back headphones. Is your room noisy with loud hum from an air conditioner or brain-rattling vibration from never-ending building construction? Such noise can mask elements of the music, preventing you from taking in subtle details and, in some cases, large portions of the tonal landscape.

The last thing I need to mention is you. What you do while listening to music impacts your ability to hear its finer points, from subtle textures and effects to melodies and instruments. Blasting some Blackalicious during a workout, singing the high parts along with Beyoncé, reading an article with Beethoven in the background, or creating a spreadsheet to the soothing timbres of Bill Evans? None of these are conducive to properly hearing the music. The best way to enjoy lossless audio is to focus on it. So, sit down, close your eyes, and just listen.

Hit us up in the Comments section, below, if you have any questions about this brave new world, or just to chat about your own experience with lossless audio.

And for more music-centric content, be sure to check out our Music Appreciation Week site.

Thanks for the helpful article. I'm wondering if I obtain a good DAC, does it make any difference what type of laptop or tablet I use to stream from Internet (I'm streaming 192 kHZ from Qobuz)? I'm especially concerned because I'm using an ipad mini 2, which simply has a headphone out jack (no 30 pin jack) Thanks!

USB, in theory, should deliver better audio than a headphone output. It will depend upon the quality of the host product.

Can you suggest some speakers - powered - and a good way to connect to the DAC - ideally something beefy for a larger room without being too $$$. 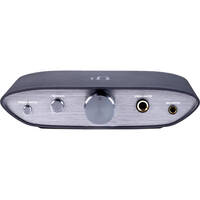