Lots of stuff on the agenda this week—some of which even shocked us! Most relevant to our creative audience is likely the Sony FE 20-70mm f/4 G Lens, a fresh take on the mid-range standard zoom with an extra-wide starting focal length. Apple's surprise launch of upgraded MacBook Pros starring the M2 Pro and M2 Max chips was another big update for anyone in the market for a new computer. Last, the lesser-known Kinefinity continues to produce surprisingly powerful and affordable cinema cameras with its mark2 MAVO series.

Though it doesn't sound like much, the extra 4mm at the wide end makes a huge difference. The Sony FE 20-70mm f/4 G Lens is a somewhat unique take on the standard zoom as it is far more common to see these lenses move toward the tele end rather than the wide side (e.g. all the 24-105s and 28-70s that exist). It makes so much sense with modern hybrid mirrorless cameras and a lot more social media and vlogging content that is being created.

This isn't the first zoom that starts at 20mm—Panasonic actually did it with its 20-60mm kit lens—though this is the first that goes all the way to a very practical-for-portraits 70mm. Sony managed to keep it quite compact and lightweight as well. The f/4 constant aperture helped out here.

Panasonic's lens demonstrates a push in this direction for video-centric shooters. It may be hard to believe but those 4mm actually matter.

If we take vlogging as our example, getting a touch more in the frame makes it easier to work with and compose around. Combine that with modern features such as Active IS that require an additional crop into the frame and having that extra room is even more helpful. Wider focal lengths also look more stable during handheld shooting than longer ones. You'll probably lean heavily on the camera IS systems since the lens doesn't have OSS built in—probably the one major feature it is missing.

From a purely photographic standpoint you might not be too enamored by the extra-wide end. There is a precedent for shooters having more trouble getting close enough to their subject as opposed to not being able to take a step back. Though, for some of you, I am sure that this lens might be perfect.

For general photography, this lens makes sense for someone looking for a more versatile travel lens with all of Sony's modern conveniences. It has the aperture ring with de-click switch, an ultra-compact and lightweight design, and outstanding optical quality. As an f/4 zoom the price is also right in the ballpark for a first-party lens at $1,098.

Considering it has been a while since this mid-range standard zoom has been updated by Sony, this is a much needed addition to the lineup. It's going to be leagues above the Sony/Zeiss 24-70mm f/4 and a bit smaller and cheaper than the quite good FE 24-105mm.

I think Sony made a great, unique lens here and it fills a nice spot in its lineup.

If you haven't yet upgraded to an Apple Silicon device or are simply looking to squeeze out the most possible power from your computer then you are in luck. Apple has just released new 14" and 16" MacBook Pros equipped with M2 Pro and M2 Max chips.

We were already fans of the latest MacBook Pros here at B&H (I even personally upgraded to an M1 Max MacBook Pro at home) and these M2 upgrades take great machines and make them even better.

Until we get our hands on one we won't have real benchmarks or tests—don't worry, this is planned to be done ASAP. For the time being we can get a sense of the improvements compared to the M1 series:

On the outside the laptops haven't changed a bit. This is great as the mini-LED displays are still outstanding, the variety of ports is nice, and the keyboard and track page are solid.

You should be able to see more responsiveness and faster processing in your favorite creative apps, even compared to M1-Max-equipped machines. The extra power and memory should allow it to power through more intense tasks like video editing and motion graphics. We can't wait to do some real head-to-head testing though, so stay tuned for more on that. 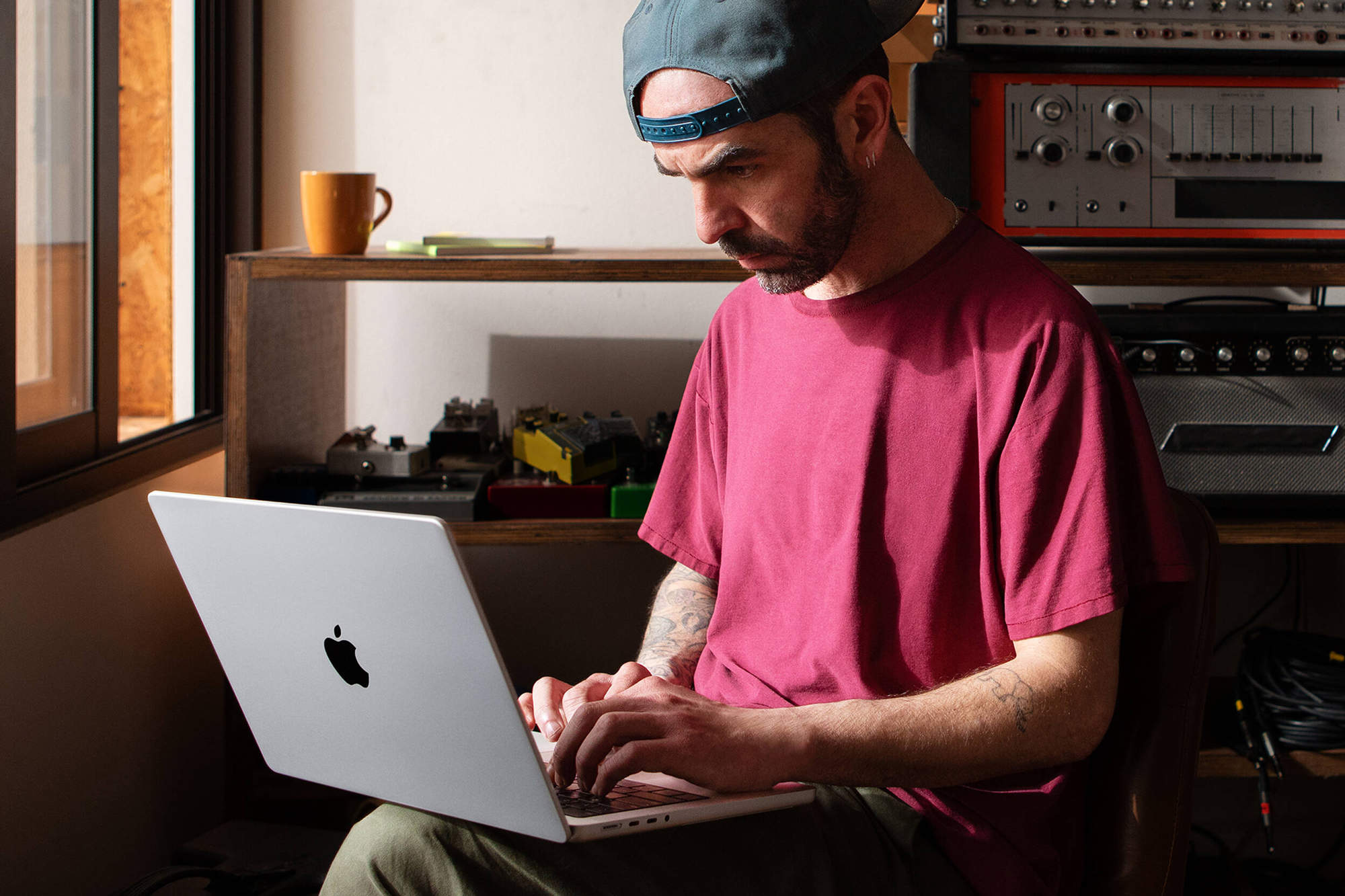 While laptops tend to be popular and eye-catching, we can't forget about the pint-sized powerhouse that is the Mac mini. It also got a processor bump to the M2 and there is even a version that uses the M2 Pro chip for even more power as well as an extra two Thunderbolt™ ports, which is probably the best reason to go for the Pro chip in the tiny computer. 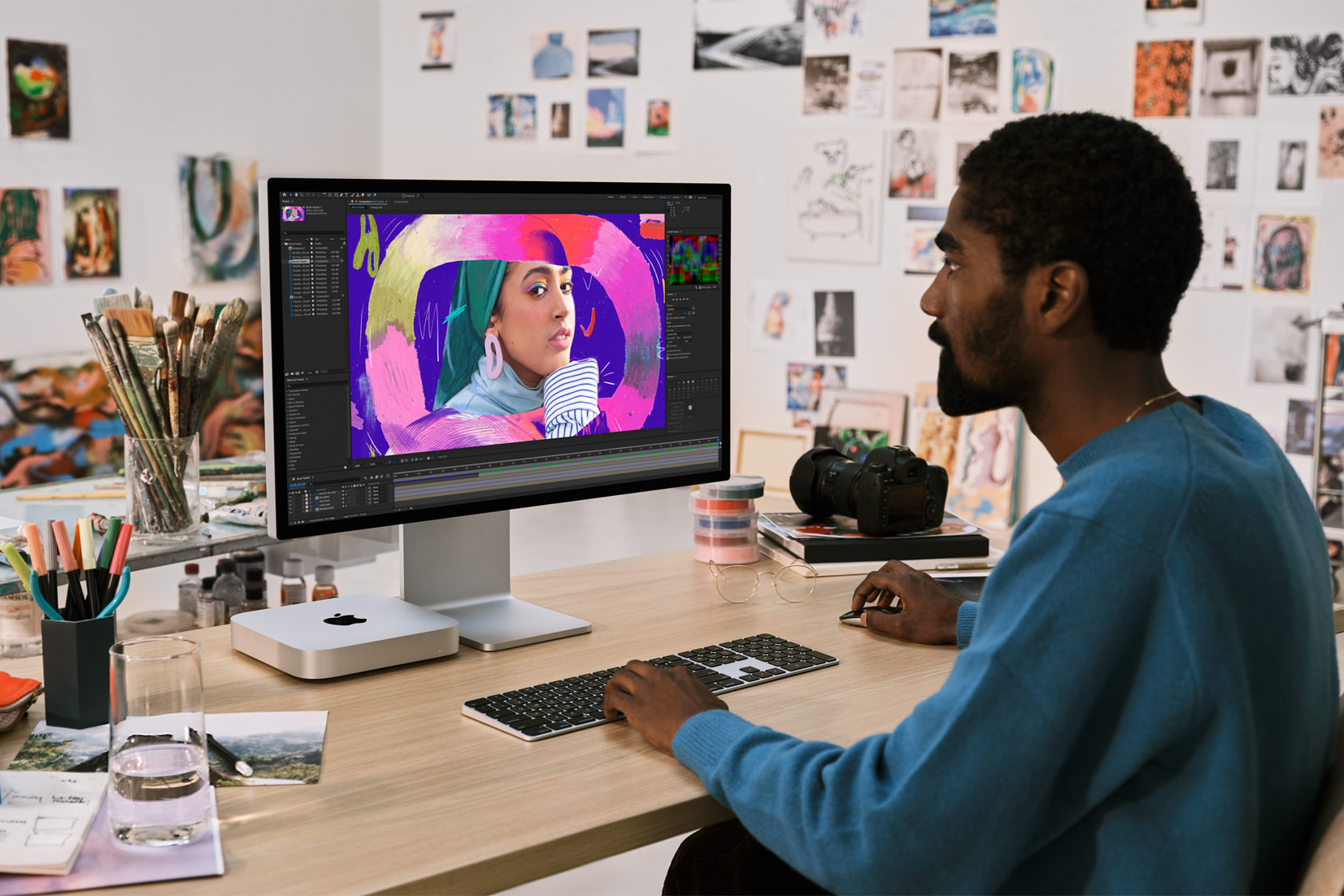 The M2 is a nicer chip and perfectly suited to the Mac mini. The more shocking news is the base model is now more affordable at just $599. I can't imagine a better computer for those just looking to do everyday tasks like reading emails or browsing the internet. The power hidden inside should keep it running smooth for a good long while.

I have a Mac mini with M1 at home and I love it. It certainly isn't the most powerful machine for photo and video editing, but it'll still knock out a quick 4K edit in DaVinci Resolve without issue. The fact that it fits so nicely on a cramped desk alongside a 42" TV is also a huge plus. The extra two Thunderbolt™ 4 ports on the M2 Pro Mac mini are very tempting and may be worth the upgrade. It's really just a bonus to me that it is also much more powerful, as well.

Finally, with the computers out of the way we can talk about one of my favorite Apple products: the HomePod. I have a few of the original models and while they struggled to gain a foothold, I loved the sound they produced. The HomePod mini was a nice option to have but the audio quality was nowhere close to the OG.

Seemingly having made some inroads in people's homes with the mini, the full-size HomePod is making a comeback. It looks similar—though it did shed a few tweeters and mics to shave down the size—uses the newer S7 chipset, and has Matter and Thread support, among other changes. Basically, if you wanted a HomePod with bigger sound, it is available again. 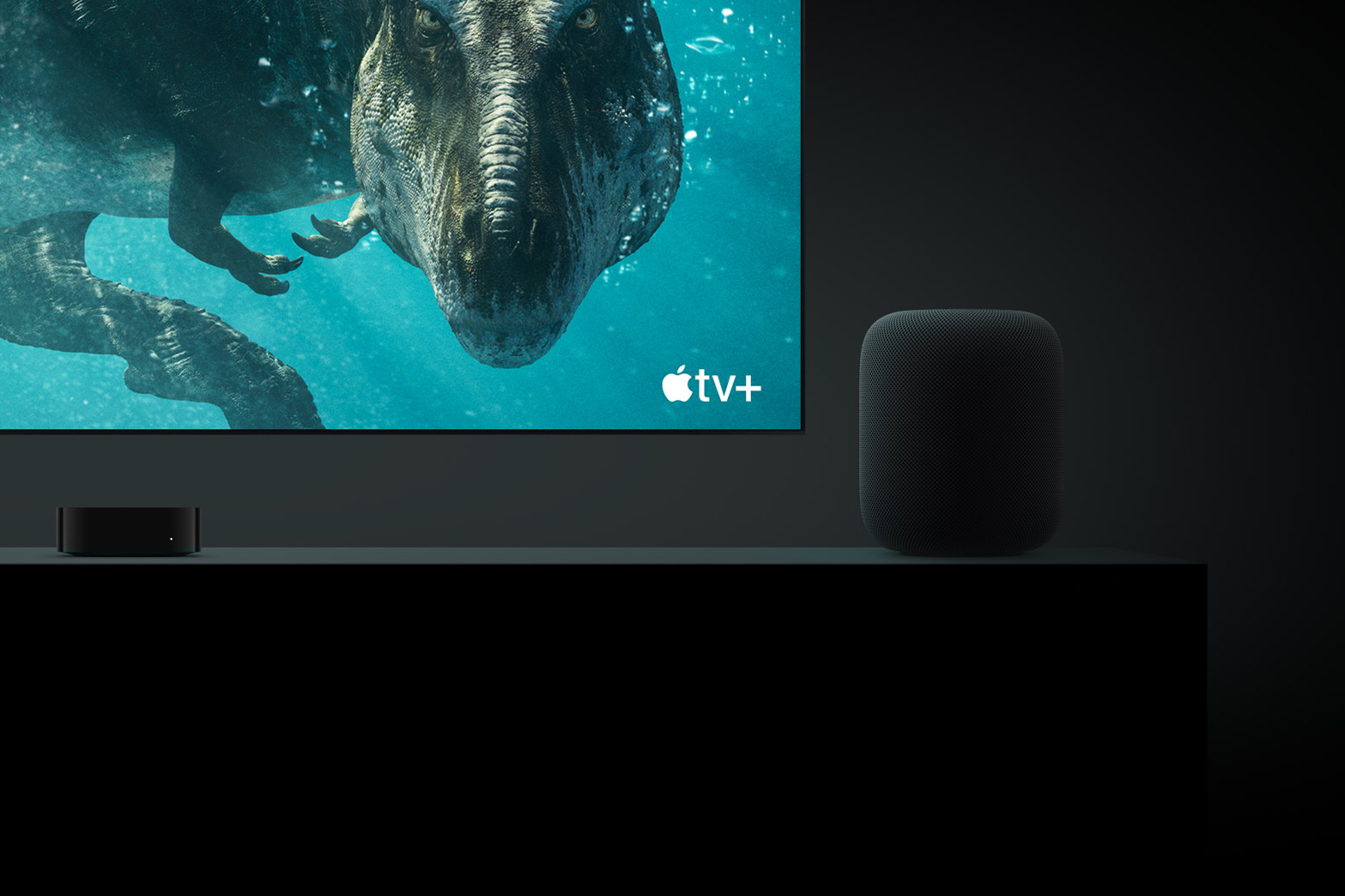 Some exciting stuff from Apple for sure.

Kinefinity may not have the same brand recognition or cachet as RED or even Blackmagic, but the cinema cameras they release have some impressive specs and even more impressive prices. Now its more popular MAVO series is getting a boost.

The company has updated two cameras:

The main difference between the two should be fairly obvious—one has a Super 35mm sensor and one has a full-frame/large-format sensor. Externally the body designs are actually similar, which is a match to the MAVO Edge series.

Getting into more of the nitty gritty, the S35 features a brand-new 6K 3:2 CMOS sensor with a dual base ISO of 800 and 3200. It'll even record in a 6K Wide format at up to 96 fps and 4K Wide at 150 fps. This is looking to be a noticeable upgrade over the older MAVO cameras. 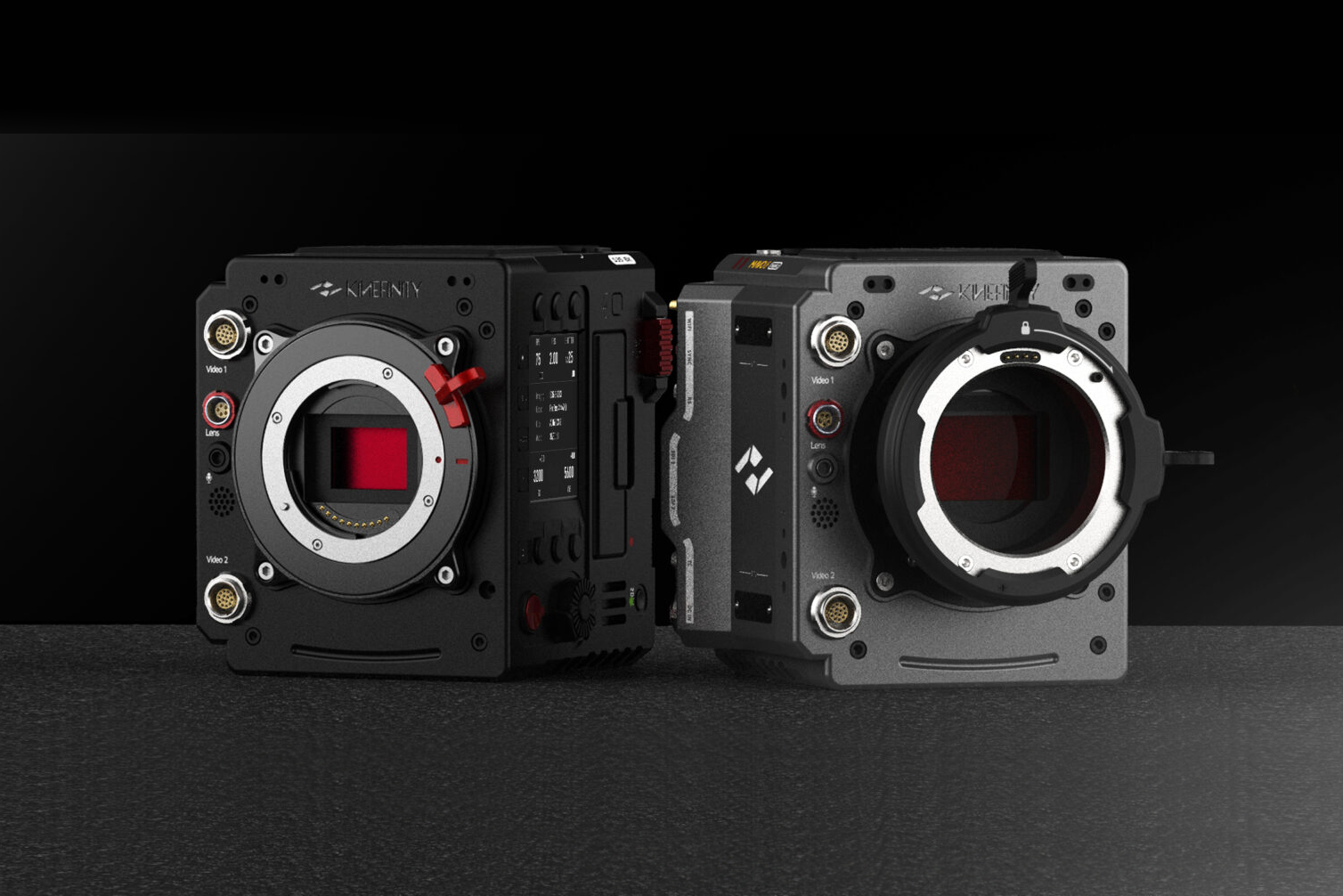 As for the LF, it actually took on the same full-frame 3:2 CMOS sensor from the MAVO Edge 6K. It's dual base ISO settings are 800 and an even higher 5120. You'll be close to the S35 in terms of resolutions and frame rates with 6K Wide up to 75 fps and 4K up to the same 150 fps. The LF sensor should provide a tad more dynamic range, especially in the highlights, per Kinefinity.

These cameras are very versatile when it comes to lenses as the company has its KineMOUNT. This allows you to easily switch adapters as well as replacing them with alternates. You can use Canon EF, PL, LPL, and Sony E lenses.

That was a lot. Time to take a break and see you all next week!