Marrying its digital and instant film systems, FUJIFILM’s INSTAX MINI EVO seems to get a lot right about what makes a successful instant film camera. It’s funny that much of what makes this camera successful is a healthy dose of inspiration from the brand’s mirrorless X system of cameras. Characterized by its retro looks and 100 distinct combinations of creative lens and film effects, this camera keeps what’s fun about instant film photography but then adds the versatility of digital effects.

The INSTAX system has proven its popularity over the years and, at this point, FUJIFILM has little obvious room left for how it can innovate an idea that’s all about simplicity. The most successful INSTAX cameras, up to this point, have been ones like the INSTAX MINI 11—mechanical, intuitive, and fun.

On the other hand, FUJIFILM has also been producing a series of “hybrid instant cameras” for some time now, like the INSTAX MINI LiPlay, which have become popular for the extra level of convenience and a sort of digital safety net compared to a straight film camera. These hybrid cameras are digital cameras in a literal sense, in that you’re capturing with a sensor and saving your photos to flash memory, but with the addition of an onboard instant film printer. Compared to something like the MINI 11, the hybrid camera gives you the chance to preview your photos before printing them, and you can save your photos and print multiple copies of them.

So where does the new EVO fit into this equation? It’s a hybrid instant camera but, in my opinion, it deviates a bit from something like the LiPlay because of the inherent fun it brings to shooting. Along with the new physical design that I’ll talk about later, the top new feature is the choice of 100 different creative effect combinations, split up between 10 Lens Effects and 10 Film Effects.

Using two distinct knobs on the camera, you can shuffle through a variety of Lens and Film Effects, which add a bit of color, texture, or flare, or even split up or double-expose your shots. The ring surrounding the lens controls the Lens Effects—Vignette, Soft Focus, Fisheye, Double Exposure, etc. These are some of the more “hardware-inspired” effects that are mimicking looks from old cameras or certain techniques you can perform on a fully manual camera. On the back of the camera is the Film Effects knob, which sits where you might find a film rewind knob, and shuffles through more color and contrast-type effects—Vivid, Retro, Sepia, Monochrome, Blue, etc. You don’t need to use any effect, but you can maximize creativity by combining effects from both dials, like Double Exposure + Blue or Vignette + Vivid.

These Effects are fun and really suit the type of shooting you do with an INSTAX; off the cuff, casual, and meant to entertain. They remind me, too, of the Film Simulation modes you’d find on an X mirrorless camera. Although those modes are based on real film types and these INSTAX modes are just general creative effects, I like the consistency of FUJIFILM offering a great range of in-camera creativity options.

Speaking of FUJIFILM’s X cameras, the other distinction this new EVO camera has is a fresh physical design that has the retro good looks and rangefinder-esque styling of an X100 or X-Pro camera. It has the black and silver exterior akin to a leatherette, chrome-colored details and, my favorite part of the camera, a moving lever that’s used to initiate the printing process. Like advancing film on a roll film camera, you just crank this lever a half rotation or so and a few seconds later an INSTAX Mini print will pop out of the camera of the image displayed on the rear LCD.

Covering some of the other physical details of the INSTAX Mini EVO, the camera has an especially sleek profile for an INSTAX camera, which is a positive consequence of the hybrid digital design. The lens is a nice 28mm equivalent wide-angle prime and focuses as close as 3.9" from your subject. Next to the lens is a small selfie mirror to help line up your self-portraits and, on the back of the camera, is a 3.0" 460k-dot LCD monitor for framing the rest of your shots. I do wish there were an optical viewfinder here, but the screen is definitely a required component when working with the effects.

The camera also has a built-in flash that’s perfect for working in low light, and there’s also a cold shoe to which you can attach an LED or even that missing optical viewfinder, if you wish. There’s a tripod mount on the base, although handheld shooting is the way to go with a camera like this, and there are two separate shutter buttons to make the squarish body a bit easier to hold from a couple of different positions. A few final details—there’s a built-in rechargeable battery, chargeable via USB type-C that lasts for around 100 prints per charge; internal memory stores about 45 shots, but there is a microSD memory card slot if you think you’ll exceed that limit; and, if it wasn’t clear from the camera’s name, it takes the common and widely available INSTAX MINI film format.

The final component, and one of the most important benefits to the hybrid instant camera, is wireless connectivity. This means the camera can serve double duty as an instant film printer using photos taken from your mobile device, or you can use your smartphone to trigger the shutter remotely, such as when you want to be in a group photo. This process works seamlessly with the dedicated mini Evo app, which is just a clean interface for selecting image files from your phone and sending them to print. This is a process carried over from the LiPlay and other hybrid cameras, but this implementation feels a bit smoother and more polished than I remember it being in the past. Connection to your phone is via Bluetooth, and the whole process of getting ready to print from your phone only takes a couple of minutes.

It’s difficult not to admire a camera like this. It takes the simple and fun concept of instant film photography in general, then adds a level of complexity and creativity with the Effects but, thankfully, the MINI EVO doesn’t take away or distract from the easy and straightforward way of shooting that’s a cherished aspect of the INSTAX system. I think FUJIFILM also finally nailed it with the exterior design on this camera. The X mirrorless system is frequently complimented for being the most stylish camera system around, and it’s great to see the brand add this flavor to the instant side of its portfolio. The Lens Effects and Film Effects are great fun, the body design is clever, and the wireless printing capabilities are truly useful. What more could you want from an instant film camera?

What are your thoughts about FUJIFILM’s INSTAX line? Are you a fan of the hybrid cameras? What other features would you like to see in an instant camera? Let us know, in the Comments section, below.

Thanks for the kind words, sonu! We try and we also appreciate receiving feedback from our readers. We hope you continue to enjoy visiting the Explora blog. 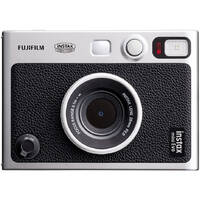 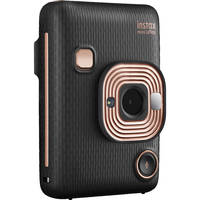 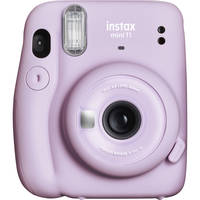