Hands-On with the Devialet Dione Soundbar

It’s hard to feel inspired when considering the soundbar landscape. In most cases, you simply get a wide, black box that’s designed to sit near your TV. You connect the soundbar to your home entertainment system and expect to be treated to an elevated audio experience—and for the most part, it delivers. If you’re being honest, though, rarely would you expect a soundbar to compete with larger systems that consist of dedicated speakers powered by an A/V receiver. Well, if you want to inject a healthy dose of surprise and excitement into your movies and TV shows, I encourage you to explore the Dione from Devialet. While not perfect, the Dione is the most engaging and fun soundbar experience I’ve had to date. Granted, sound quality is subjective, but allow me to explain how I reached this conclusion.

While Devialet may not be a household name, I’m certain its speaker designs will be a conversation starter wherever you place them in your household. Remember what I said about boring black boxes? When you look at the Dione, it’s obvious that Devialet has departed from the mundane. Fans of the luxury brand know that Devialet isn’t afraid to take design risks and the Dione’s aesthetics fit nicely into the brand’s speaker catalog. In the middle of the Dione’s cabinet sits an Orb that houses the soundbar’s center channel speaker. The Orb can be manually rotated to match your speaker placement. I placed the soundbar flat on a TV stand, but the Dione is just as comfortable mounted on a wall, and the Orb can be rotated to accommodate this placement. There are a total of 17 drivers in the soundbar, four of which are up-firing, that combine to deliver up to 5.1.2-channels of playback for enjoying Dolby Atmos content. It’s worth noting that currently there’s no option to expand the system if you want to add dedicated surround speakers or a subwoofer, but more on that later. At 47 inches wide and weighing approximately 26 pounds, it’s easy to justify the size of the Dione when you consider its internal components and 950-watts of amplification.

Getting the Dione up and running was like experiences I’d had with competing soundbars from Sonos and Bowers & Wilkins. The Devialet smartphone app, which is available for iOS and Android, walked me through the setup and Internet connectivity in a matter of minutes. Wi-Fi and Ethernet connections are both available, which is great because I prefer wired connections. The app also guides you through room calibration, allowing the Dione to tailor its sound to your listening environment. While the room correction software requires silence to work its magic, the overall process was very fast—among the quickest I’ve experienced. The app can also detect how the speaker is positioned to further optimize the sound in your listening space.

For physical connections, the Dione supports CEC, ARC, and eARC via its single HDMI 2.1 input. eARC is a requirement for enjoying Dolby Atmos content and can be found on a vast number of late model TVs, but it’s best to check your display’s specifications when pairing the two. Though I would’ve liked to see additional HDMI inputs for connecting external devices directly to the soundbar, such as gaming consoles or streaming devices, the Dione does offer an optical input for connecting legacy displays. On the wireless side, the Dione supports Bluetooth 5.0, Apple Airplay 2, and Spotify connect.

Simply stated, the Devialet Dione sounds “bigger” than any soundbar I’ve ever heard. Virtual Dolby Atmos configurations can be hit or miss, but the Dione did such a good job of creating a wall of sound that I double-checked to make sure my reference system with dedicated in-ceiling Atmos speakers wasn’t on. My primary listening room is in a basement with a 7.5-foot ceiling, so the soundbar doesn’t have to project height channels very far, but it was quite impressive nonetheless. Another pleasant surprise came in the form of bass reproduction. Eight of the Dione’s 17 drivers are dedicated to subwoofer use and you can absolutely feel it. The Dione is the first soundbar that I can confidently say doesn’t require an external subwoofer. Not only is the bass present and impactful, but it didn’t seem to muddy dialogue either, which can be a challenge for bass-y systems. One of my go-to reference movie demos is Casino Royale, specifically the opening chase scene in Madagascar and, a few chapters later, the dialogue-heavy scene aboard the train in Montenegro. The train ride scene can be tricky for unbalanced systems because of the weight of James Bond’s voice mixed-in with the rumble of the train. The Dione handled all my reference material quite well, proving that an all-in-one system can deliver wide and expansive soundstages.

Music, however, is where I found the Dione’s bass reproduction to be too much for certain genres. The Dione does allow you to toggle between Movie, Music, Voice, and Spatial Modes via its app, but there isn’t a dedicated EQ for simple adjustments to bass and treble. The Dione’s SPACE technology did a great job of up-sampling stereo source material to 5.1.2-channels, and this was especially evident during movie playback, but it didn’t do much to tamp down the soundbar’s bass reproduction for music despite delivering a bigger, overall soundstage when engaged. As a result, certain soundtracks were too bass-heavy to my ear. Hopefully, this can be addressed in a later software update, but if you intend to use the Dione primarily for TV show and movie playback, it likely won’t be as noticeable. 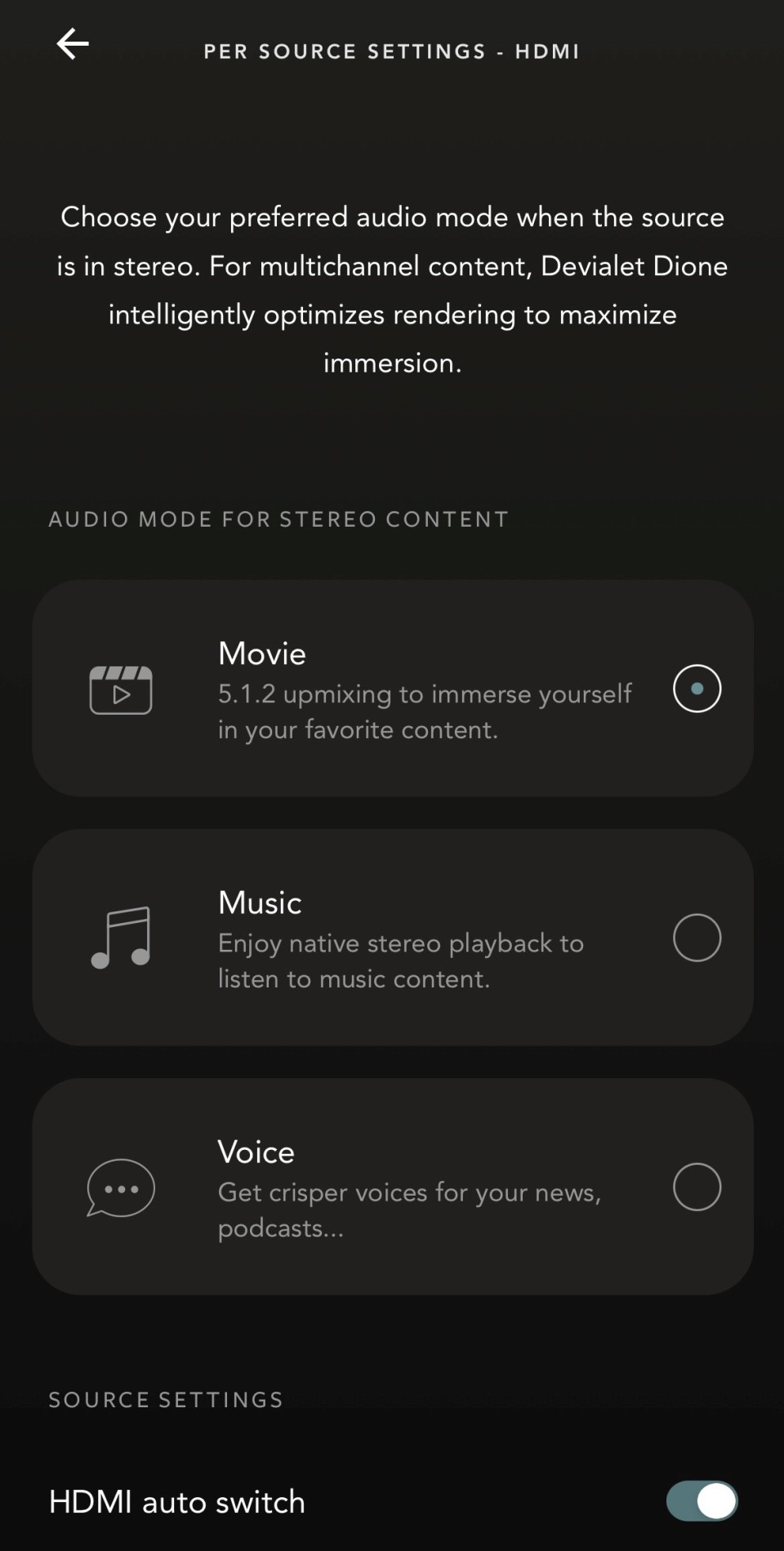 Controlling the Dione is easy, thanks to its app, and there are touch controls atop the soundbar that allow you to switch inputs, activate Bluetooth, adjust the volume, and turn off the room-correction microphone. If you’re connected to an HDMI CEC-enabled TV, you can use your existing remote for simplified volume and power control of the soundbar.

All Dolby Atmos soundbars aim to deliver multi-dimensional sound, and some are better than others, but the Dione has set the bar incredibly high. This is a good thing for Devialet, consumers, and even other manufacturers as technological advancements drive innovation and competition. However, if you want the most immersive stand-alone soundbar today, I haven’t heard one better than the Devialet Dione. While I wish it had more EQ controls, especially for music, its movie reproduction via up-sampling or direct Dolby Atmos was top notch. I also wish there were an option to add dedicated surround speakers, which is also something that could be made available later. But considering the wide variety of content I threw at the soundbar, I didn’t find this to be a deal breaker. The Dione was my first time reviewing a Devialet product, and it made quite the first impression. While the Dione does command a premium price, it’s comforting that its sound quality keeps pace. 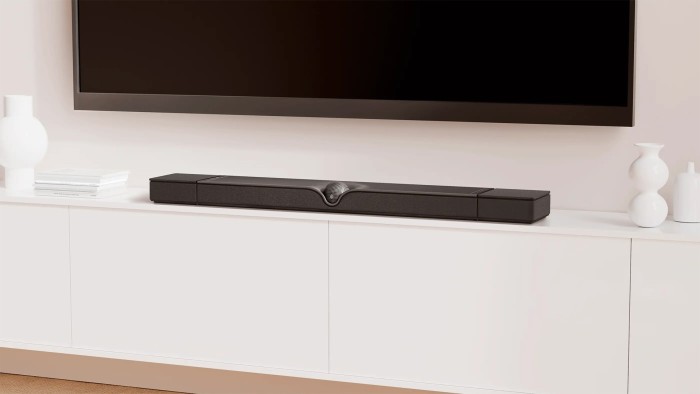 Have you experienced Dolby Atmos via a soundbar? What did you think? Let us know in the Comments section, below. 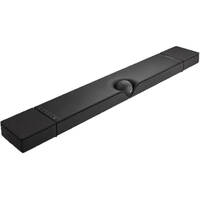