Samsung released a new version of its 980 PRO Solid-State Drive designed specifically for those who want top-of-the-line performance in their high-end PCs or PS5s. Arriving with a built-in heatsink, the drive meets Sony's own heatsink specifications for SSDs, given the limited space in the M.2 slot. According to Sony, the total height of the M.2 SSD with a heatsink must be less than 11.25mm (0.442"). Samsung's SSD expands the internal storage of a Sony’s latest console with support for up to 7,000 MB/s transfer speeds.

Designed with the PS5 in mind first, the new Samsung 980 Pro SSD’s built-in heatsink helps it achieve the extra heat dissipation required to avoid the thermal throttling found on the unshielded version. Other than the form factor upgrade with the added heatsink and the seal of approval to work with PS5, Samsung isn’t changing too much with this version of the 980 Pro SSD. There’s still support for up to 7,000 MB/s sequential read speeds, as well as 5,100 MB/s stats on the writing side of things, thanks to PCIe Gen 4.0 x4 connectivity. That’s well above Sony's baseline requirements, giving this new debut plenty of performance to work with. And given that this is your typical M.2-compliant SSD, the new Samsung release is compatible with most PC builds, as well.

Given that most console gamers are used to a plug-and-play environment and probably don’t want to fuss with compatibility issues or anything of the sort for their PS5, the added confirmation from Samsung that its 980 Pro SSD will work out of the box is certainly going to be a perk for many—even with the higher price tag.

The Samsung SSD 980 PRO comes in 1TB and 2TB models and will be available worldwide starting this month. For more information, including warranty details, please take a look at the full product page right here at B&H. And if you have any questions, post them below in the Comments section. 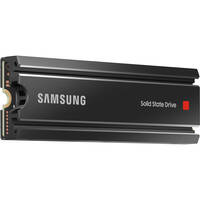