QNAP has always offered a variety of NAS- and RAID-compatible solutions that can be used for virtually any computing, networking, and storage need. The brand’s latest offerings, the TVS-hx74 and TS-x64 series, are no exception and feature upgrades that will help users and businesses further excel.

Both the QNAP TS-464 4-Bay NAS Enclosure and TS-664 6-Bay NAS Enclosure are powered by a 2.0 GHz Intel® Celeron™ Quad-Core processor, 4GB of DDR4 memory, and feature two 2.5GbE RJ45 ports and port trunking for up to 5 Gb/s of bandwidth. Thanks to the PCIe 3.0 x2 expansion card slot, users will be able to extend their NAS functionality by installing a 10GbE/5GbE network card or a QM2 card for M.2 SSD caching, which works with the existing M.2 2280 PCIe 3.0 x1 slots to enhance Edge TPU technology performance for AI image recognition. Either of these setups is a solid choice for those looking for run light VMs and containers, and supports multi-cloud backup, cloud storage gateways, 4K HDMI output, and real-time transcoding, alongside an expandable storage capacity and feature-rich apps to perform as a cost-efficient, reliable 2.5GbE NAS.

Both models also have two 10 Gb/s USB-A 3.2 Gen 2 ports and two 480 Mb/s USB-A 2.0 ports for connecting external peripherals, two M.2 2280 PCIe 3.0 x1 slots for cache acceleration or SSD storage pools, and operate using the QTS hero operating system. For tasks that require a bit more oomph, the memory may be upgraded to a maximum of 16GB. Aside from the TS-464 having four 3.5" drive bays and the TS-664 having six 3.5" drive bays, these models are largely similar and will suit the needs of professionals and office users with high-speed demands.

Well, there you have it. Both series offer solid picks, but in the end, what do you need? If you need M.2 SSD caching with PCIe 3.0 expandability for high-speed file transmission and virtualization applications, go for the TS-x64 series. If you’re running an entry-level SMB and need PCIe 4.0 expandability for 10/25GbE connectivity and M.2 NVMe SSD caching, then you’ll want one of the TVS-hx74 models.

What are your thoughts on QNAP’s latest offerings? Do you already use a QNAP NAS, or are you thinking of purchasing one? Do you use something else? Feel free to leave your thoughts in the Comments section, below.

David A.
2 months ago

Hi, David A! We love that you're loving the TS-464. We also think that spousal permission is no laughing matter, but if springing for a piece of tech at a higher price point ups your creative/workflow game and boosts speed and efficiency, how could she say no? Thanks for reading and for taking the time to post your comments, and best of luck! 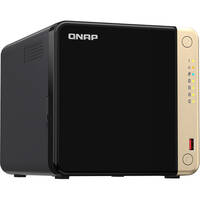 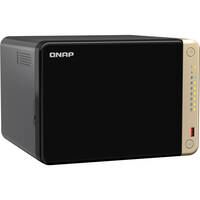 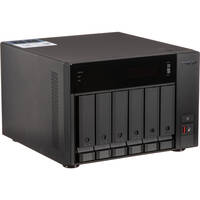 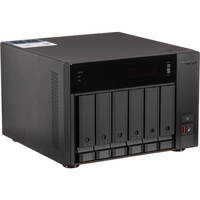