In the span of a few short weeks, Oculus has released not one but two major software updates for the Oculus Quest 2. Firmware versions v28 and v29 unlock several new features and modes for the popular VR platform, including wireless PC streaming via Air Link, 120Hz support, and the new “Live Overlay” feature—just to name a few.

Oculus’s new Air Link feature is, without a doubt, the headliner of these updates, because it gives you the ability to run PC VR games and applications wirelessly on your Quest 2 headset. This new streaming capability represents a major milestone for the Oculus Quest series, which began as a stand-alone device that, while excellent for a self-contained VR platform, was ultimately limited by its inability to play PC VR games. With that limitation now gone, the Oculus Quest 2 can now compete with any consumer VR platform on the market—even those costing literally three and four times as much as the Quest 2.

Another key feature of these new updates is support for 120Hz refresh rate. Firmware v28 unlocked native support for 120Hz titles, which allowed you to play native 120Hz titles on the Quest 2 headset. Those titles either had to be downloaded onto the Quest 2 headset or accessed from a PC via USB-C cable, such as the Oculus Link. Firmware v29 took that added support one step further by introducing 120Hz support over Air Link, meaning you can now stream buttery smooth 120Hz VR content directly to your Quest 2 headset.

Although Air Link and 120Hz support are the undeniable headliners of these new updates, they aren’t the only important new features introduced. With firmware v29, Oculus also rolled out a new “Live Overlay” feature, which lets iOS users layer themselves onto live VR casts or recordings. And speaking of casting and recording: Oculus (finally) unlocked the ability to use the Quest 2’s built-in mic to capture and preserve voice audio while webcasting or during a gameplay recording—putting to bed what was probably the most-requested Oculus Quest 2 feature to date.

Both firmware v28 and v29 are OTA updates, meaning they are automatically downloaded and installed to your device. You won’t have to connect your Quest to get the updates, but they are rolled out over the course of several weeks, so not everyone will get theirs at the same time. An easy way to check and see if your device is updated to the latest firmware is through the “Settings” option on your Quest’s bottom navigation bar. Find and select the “About” tab from the settings menu and look for the OS version. If it says v29, you are good to go.

Questions about the new firmware updates, Oculus, or VR gaming in general? Send us all your questions and comments down below and we’ll get back to you right away. 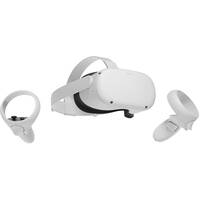