In a year where there was no shortage of excellent gaming monitors, the Gigabyte AORUS FV43U ranked right at the top. Its long list of premium features includes 4K graphics, a 144Hz refresh rate, stellar color and HDR performance, and so much more. We had a chance to experience these features first-hand and can say with full confidence: You will be hard-pressed to find a better 4K gaming monitor in this size class or any other. Here is our review.

At 43", the Gigabyte AORUS FV43U is bigger than most conventional gaming monitors, which typically fall somewhere in the 24 to 32" range. That larger-than-average footprint is something you’ll want to keep in mind, especially if you’re working with a setup that has limited desk space. Unlike other manufacturers, which tend to embellish gaming monitors with loud, sometimes over-the-top designs, the AORUS FV43U features a clean, unobtrusive aesthetic that could easily be mistaken for a conventional TV.

Setting the AORUS FV43U up is a breeze thanks to a pair of easy-to-install legs that attach quickly and are reliably sturdy. This monitor doesn’t offer any height or ergonomic adjustments, but it is 200 x 200mm VESA mount compatible, so you can safely attach it to a wall or compatible stand if you prefer.

Once the monitor is set up, connecting to your preferred gaming platform or platforms is easy, thanks to the AORUS FV43U’s full complement of connectivity ports. Those options include a DisplayPort 1.4 with Display Stream Compression (DSC) and two HDMI 2.1 ports. Additional connectivity options include a USB Type-C port, two headphone jacks, and three USB 3.0 ports.

While it doesn’t face as much competition as some of the other size categories, the AORUS FV43U is nonetheless the king of its class. The 4K VA panel delivers contrast, color, and HDR performance that cannot be topped by any gaming monitor at this size—at least, none that we have tested.

Speaking of HDR performance: Thanks to the AORUS FV43U’s 1,000 nits of brightness and 10-bit color, HDR-enabled games look nothing short of breathtaking. One of our go-to games for monitor testing is Destiny 2, and the quality of the picture cannot be overstated. While playing the campaign mode, we often found ourselves straying from the main objective to just explore and marvel at the scenery. For one mission, in particular, you start on the hull of a spaceship, surrounded by the vastness of space. The depth of color and the contrast between the blackness of space and the metallic tone of the ship was rendered so gorgeously, it felt like we were staring into an absolute void. We’ve tested that particular mission several times and never before has it felt so immersive. It was jaw-dropping.

One thing to remember, however, is that while gaming graphics look absolutely sublime on the AORUS FV43U, that isn’t necessarily the case for movies or television programming, the reason being this monitor’s lack of necessary image processing, which it foregoes to reduce game-slowing input lag. We’ll talk about why that trade-off is very much worth it in the next section, but it’s something you should definitely keep in mind if you’re looking for a top-tier gaming monitor and television.

The list of big-screen 4K gaming monitors is relatively short, but that doesn’t make the AORUS FV43U’s gaming performance any less exclusive or elite. We hazard to guess that even as more of these types of monitors appear on the market, the AORUS FV43U will remain a best-in-class option.

Gaming performance for monitors, especially for competitive genres like online first-person shooters, is largely determined by the refresh rate and response time, which both determine how “smooth” a game looks and feels. The AORUS FV43U’s 144Hz ridiculously high refresh rate is virtually unheard of in 4K monitors. Combined with an undetectable 1 ms response time and visual-enhancing features like AMD FreeSync, gameplay on the AORUS FV43U was consistently super smooth and fluid, even in action-packed games like Call of Duty: Warzone of Apex Legends, where it’s absolutely critical.

Of course, one thing to keep in mind is that, as with any gaming monitor, what you see on screen is directly tied to your gaming rig. In other words: Just because the Gigabyte AORUS FV43U is a premium monitor, that doesn’t guarantee a premium gaming experience. To get the most out of the AORUS FV43U, you’re going to need a powerful graphics card.

For example: We were able to run Destiny 2 at 4K using an ASUS ROG Zephyrus G15 laptop, which has an RTX 3070 inside, and consistently hit 90 frames per second (fps). For Warzone, we had to lower our settings to 1440p so that we could play above 100 fps. Those were the highest levels our rig could consistently sustain, even with game performance enhancers turned on and graphically demanding features like HDR disabled. In other words, if you want to get the most out of this monitor, you’re likely going to need an RTX 3080 or higher, and even then, there is no guarantee that your PC will be able to match the AORUS FV43U’s high potential.

Of all the gaming monitors we reviewed in the last 12 months, the AORUS FV43U might be our favorite. By virtue of design, gaming monitors typically require a trade-off: either graphics or gaming performance. However, the AORUS FV43U manages to strike a wonderful balance that makes it seem like you don’t have to forego either. Of course, there’s no such thing as a perfect gaming monitor, and while its gaming bona fides are nye unassailable, we would be far less enthusiastic about recommending the AORUS FV43U for heavy TV viewing and streaming applications (Netflix, Hulu, etc.). While generally good, those applications do come with limitations and intermittent performance issues, enough that you might consider other alternatives. However, if you are shopping for a gaming monitor, and 43" isn’t too much size for you, we cannot think of a better option.

Use the Comments section below to tell us which features of the Gigabyte AORUS FV43U make it a candidate for your next gaming monitor.

I lobe this monitor and the Ergotron HX arm makes it perfect. 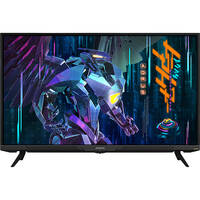