This year, ASUS released the ROG Swift PG32UQX, the world’s first Mini LED gaming monitor. The groundbreaking display measures 32" and boasts a wish list of premium features, including 4K graphics resolution, 144 Hz refresh rate, HDR support, and so much more. But as any serious gamer will tell you, just because a monitor is good on paper, doesn’t guarantee it’s good in practice. To see whether the ROG Swift PG32UQX could live up to its impressive spec sheet and incredible hype, we spent some time testing it with some of our favorite titles.

What Makes a Good Gaming Monitor?

In our introduction to gaming monitors primer, we broke down what you need to look for when choosing a gaming monitor, including optimal specifications for screen size, resolution, refresh rate, and response time. The ROG Swift PG32UQX scored high in all those categories―in some cases, exceedingly so.

At 32", the ROG Swift PG32UQX is on the higher end of the ideal size range, making it a good size for competitive and casual gamers alike. Its high resolution, color performance, and visible-from-the-moon brightness levels are beyond impressive. Without a doubt, this is one of the most beautiful panels we have ever reviewed.

The ROG Swift PG32UQX’s high 144 Hz refresh rate and 4ms response time fall into the optimal category range, although the response time is higher than what you would expect from a premium gaming monitor (Remember: When it comes to response time, lower is better). However, I did alternate playing Call of Duty: Warzone, Apex Legends, and Destiny 2 on the ROG Swift PG32UQX and a rival 4K monitor with a lower response time and couldn’t detect a noticeable difference in controller input or latency.

As we mentioned earlier, the ROG Swift PG32UQX is the first gaming monitor in the world to use Mini LED backlighting. This relatively new type of panel technology uses thousands of tiny LEDs, spread across hundreds or even thousands of dimming zones (in this case, 1,152 dimming zones), to enhance control over lighting and contrast greatly—far more than a conventional LCD panel.

In addition to dramatic improvements in brightness levels and contrast, Mini LED backlighting greatly improves HDR performance—as evidenced by the ROG Swift PG32UQX’s ridiculous DisplayHDR 1400 certification, which means it can hit a retina-frying peak brightness of up to 1400 nits.

Now, while that insane brightness level does help the ROG Swift PG32UQX achieve one of the best overall pictures we’ve ever seen, it does have drawbacks. For instance, in some games, you do get some haloing around certain high-contrast elements or bright points. For example, there was a noticeable halo effect around the HUD when we were playing Call of Duty: Warzone, although we didn’t feel it greatly impacted our gameplay.

Does the ROG Swift PG32UQX’s Have Any Cons?

Although we wouldn’t label them cons, the ROG Swift PG32UQX does come with some caveats. The first is that, as with any gaming monitor, what you see on screen is directly tied to your gaming rig. In other words: Just because the ROG Swift PG32UQX is a premium monitor, that doesn’t automatically guarantee any game you play on it is going to look great. To get the most out of the PG32UQX, you’re going to need to put some serious muscle behind it.

I was able to cross the 4K HDR 144 Hz threshold on Destiny 2 using my ASUS ROG Zephyrus G15 laptop, which has an RTX 3070 inside. I tried to play Warzone using the same settings, but my rig couldn’t sustain the draw, so I had to dial the settings back to 1440p. The takeaway is that if you want to get the most out of this monitor, you’re likely going to need an RTX 3080 or higher, and even then, there is no guarantee that your PC will be able to match the PG32UQX’s potential.

Another caveat is the HDMI standard. With the ROG Swift PG32UQX, ASUS opted to go with HDMI 2.0 instead of HDMI 2.1. We can’t for certain say why they made this decision, but most likely it had to do with getting the monitor’s G-Sync functionality to play nice with the Mini LED backlighting. It’s not a big deal right now.

One of the main benefits of HDMI 2.1 over HDMI 2.0 is a higher resolution output—e.g., 4K/120 fps and 8K/120 fps compared to 4K/60 fps and 8K/30 fps. But if you’re playing on your PC, you’re likely using your DisplayPort over HDMI anyway, so no loss there. If you’re playing console (PS5 or Xbox), yes, you won’t be able to play titles at 4K120, but currently those titles don’t really exist. Several games have been upgraded to run at 1080p120, but you can hit that using HDMI 2.0. Now, as far as future console gaming goes, not having HDMI 2.1 could be an issue—something to keep in mind.

The final caveat is the price. We’re talking some major sticker shock here. Don’t get us wrong: The ROG Swift PG32UQX offers great overall value and plenty of bang for your buck and, realistically, the ROG Swift PG32UQX is not going to be in everyone’s budget.

Is the ROG Swift PG32UQX Worth It?

Is There a Good Alternative to the ROG Swift PG32UQX?

The ROG Swift PG32UQX might be the best gaming monitor we’ve ever reviewed. It’s definitely the most expensive. Despite its price, do we think it offers great value? Absolutely. Do we also think that you’ll have just as much fun playing on a more affordable model like the ROG Swift PG32UQ? Yeah, most likely.

Questions or comments about the ROG Swift PG32UQX or gaming monitors in general? Sound off in the Comments section, below.

very intersting. i was looking at this monitor and wondering whether itd be worth it since i play on both xbox and ps5 and this doesn't have hdmi 2.1 the other swift is tempting because of hdmi 2.1 but no microled makes me hesitate. maybe i should just buy oled tv instead lol 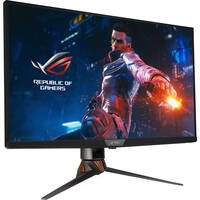