Speed up Your Video Workflow with QNAP NAS Enclosures

Between high-resolution video clips, B-roll, music, effects, and more, it’s clear that you can never have enough storage when creating professional-grade video content. For instance, one hour of 8K REDCODE RAW 75 footage takes up about 7.29TB, which amounts to 121.5GB per minute, and storage requirements are bound to grow as we move toward 12K or higher resolutions. Even working at 4K resolution can amount to around 741.6GB for an hour of RAW BMPC 24 footage. So, whether you prefer to shoot in compressed or uncompressed formats, it’s safe to say that the more storage you have on hand to offload and organize your footage, the better. Fortunately, QNAP offers a variety of RAID-compatible storage solutions that can connect to a 10Gb Ethernet network for collaborative projects or directly to your Thunderbolt™ 3 compatible Mac system.

The QNAP TVS-472XT 4-bay enclosure is an excellent starting point for freelancers who want the flexibility to customize the storage and performance as their needs grow. It comes equipped with a 3.1 GHz Intel® Core™ i3 or Pentium Gold processor and 4GB of memory that can be expanded to 64GB for heavier workloads. There is also a PCIe x4 for compatible expansions such as wireless network adapters. If it turns out four drives aren’t enough, you can add expansions.

Another benefit is that its relatively small size allows you to take the enclosure with you to different locations. But don’t let the size fool you. The TVS-472XT can reach read speeds of up to 1158 MB/s using a 10Gb Ethernet connection when four SATA III solid-state drives are installed in RAID 5 configuration, which is more than double the speed of a single internal SATA SSD. Mac users with Thunderbolt™ 3 ports can connect directly to the TVS-472XT to enjoy up to 1087 MB/s read and 1024 MB/s write speeds. Those transfer speeds can be further enhanced by installing up to two M.2 SSD cache drives. Also, having high-bandwidth 10Gb Ethernet and Thunderbolt™ 3 connections means that you have the option of using the files directly from the enclosure instead of losing time by copying them to your local system before editing and exporting them into different formats.

Those who want to hit the ground running can check out the preconfigured TVS-472XT models that include 12TB (4 x 4TB) and 24TB (4 x 8TB) capacities using WD Red Plus SATA III hard drives in RAID 5 mode. RAID 5 provides the ideal balance between speed and security, since the data are striped across all the drives for fast access, while correction codes called parity bits allow you to recover from drive failures. Another benefit is that you’re able to utilize most of the installed drive capacity.

For small studios, collaboration between different individuals and departments is paramount. When your projects include a multitude of RAW video, music, effects, and other media files, then the 6-bay TVS-672XT might be the right NAS enclosure for you. The TVS-672XT has near-identical specifications to the TVS-472XT, except that this enclosure has 8GB of memory pre-installed and its six-drive capacity allows it to support RAID 50 (aka RAID 5+0), which is essentially an enhanced version of RAID 5 that offers improved write speeds and faster rebuilds so you can quickly recover from drive failures. Other than that, the read and write performance between the two systems are comparable when equipped with SATA SSDs in a RAID 5 configuration.

Like the TVS-472XT, the 6-bay model has two Thunderbolt™ 3 ports that allow you to daisy-chain multiple devices and transfer data at up to 40 Gb/s. The ability to connect multiple external drives to transfer data directly to your NAS can significantly boost your workflow, since you don’t necessarily have to use a computer as a go-between. There are also multiple 10 Gb/s USB 3.1 Gen 2 Type-A and Type-C ports available for compatible flash drives and other peripherals, so you can quickly share critical files with the entire team and meet your deadline. The TVS-672XT is also available with 48TB of storage installed using six 8TB WD Red Plus 7200 rpm hard drives preconfigured in RAID 5.

If your project has the budget for maximum storage and performance, then you should consider the 8-bay QNAP TVS-872XT NAS enclosure. Powered by a 1.7 GHz Intel® Core™ i5 processor with 16GB of memory, this enclosure can achieve 1171 MB/s read and write speeds through a 10GbE network and 1230 MB/s read speeds with Macs with a Thunderbolt™ 3 connection. As with the other enclosures, performance can be pushed further by installing M.2 cache drives.

The TVS-872XT offers all the same versatility as the TVS-672XT and TVS-472XT, but having the extra drive capacity enables RAID 60. Similar to RAID 5 and 50, RAID 60 stripes data across all the installed drives, but it also uses two parity bits instead of one, offering increased recoveries and better performance when drives fail. However, double parity comes at the cost of slightly slower write speeds and decreased storage space for you to use.

All three enclosures include an HDMI port, so you can view files directly from the NAS by attaching a compatible monitor, mouse, and keyboard. Alternatively, you can take advantage of their real-time video transcoding capabilities using the integrated Intel® UHD graphics or a separately installed graphics card to encode and decode H.264 videos as they’re streamed to multiple devices. That means your entire team can view projects and clips from their computers, tablets, and phones and offer input without having to leave their desks.

Which QNAP NAS enclosure best fits into your workflow? The 4-bay TVS-472XT, 6-bay TVS-672XT, or 8-bay TVS-872XT? Do you prefer accessing data via a network connection or directly using Thunderbolt™ 3? Let us know in the Comments section, below. 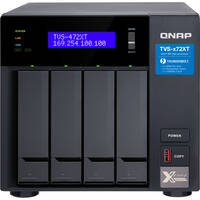 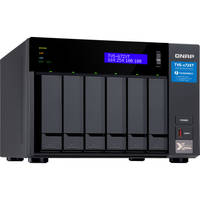 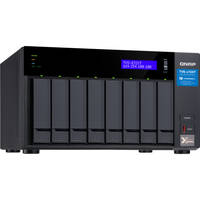 Features
The Mac Studio is a New,…
by Shawn C. Steiner
2 months ago
SaveLikeFacebookTwitterLinkLink

Features
iMac and M1: The Power to Do…
by Mos Khan
1 year ago
SaveLikeFacebookTwitterLinkLink
Close
Close
Close