It's the Wireless Router Roundup

Now, more than ever, a reliable Internet connection is critically important. For the millions of people working from home, the ability to do their job literally depends on it. The same is true for remote learners, virtual socializers, gamers, or anyone who wants to stream a Netflix series or two. Without a good Internet connection, those things aren’t possible—which is why you need a good wireless router.

What makes a “good” wireless router?

As with most things, there’s no one perfect example of a “good” wireless router. There are wireless routers that are good for you, your needs, and your particular setup, but that doesn’t mean they’re automatically good for your neighbor. However, if we take a step back, what we can say is that, in general, a good wireless router gives you fast, reliable Internet coverage for your entire home, at a cost that seems proportional to performance, and with a usability that makes it easy to install and deploy. One of the easiest ways to tell if you have a good router is if, after you’ve set it up, you never have to think about it again.

Do I need a new wireless router?

If your Internet feels slow or lagging, you might have come to the conclusion that your old router is to blame. That’s definitely a possibility, but before you go all-in on buying a new wireless router, take some time to make sure it’s actually the problem. A good place to start is this helpful article on how to optimize your home Wi-Fi setup. Not only does it contain some great tips on how to get the most out of your existing setup, it also includes a lot of good information on what to look for when shopping for a new wireless router.

Should I rent a router from my Internet provider?

The short answer to this question is no. Internet providers aren’t necessarily all the same, but likely yours charges a monthly fee to rent a wireless router from them, which is money you could just put toward a router that you will own outright. Also, a rental router will likely be deficient compared to current technological standards and coverage, and there’s a decent chance your Internet service provider (ISP) won’t be very quick on the draw when it comes to updating the software.

Of course, that doesn’t mean you absolutely shouldn’t rent a router. When I was a poor college kid, I couldn’t really afford to buy a hundred-dollar router. I could just barely afford the extra $10 a month it cost to rent one from my ISP. Was that router great? No. Was my service lousy? Kind of. But sometimes good isn’t a possibility. Sometimes “kind of lousy” is all we can afford. The world has advanced a lot since I was in college, so renting from your ISP most likely won’t be the end of the world. But if you have a choice, and you need a higher level of speed and performance, we’d recommend buying over renting.

What about my modem?

The latest, greatest, and probably a little ahead of its time router.

As someone who owns the TP-Link Archer AX6000 Wi-Fi Router, I feel confident in saying it’s one of the best wireless routers you can buy. It supports the latest version of Wi-Fi—Wi-Fi 6—which means it’s compatible with current and future generations of connected devices. Its coverage is excellent, and the latency is super low. In fact, the reason I bought the Archer AX6000 was because I’m a gamer, and I wanted a router that would help eliminate lag. On top of all that, its transfer speeds are incredibly fast. According to TP-Link, the dual-band Archer AX6000 can achieve throughput speeds up to 6000 Mb/s (4800 Mb/s on the 5 GHz band and 1148 Mb/s on the 2.4 GHz band). I’ve never clocked it myself, but what I can tell you is that regardless of whether I’m downloading a movie, video game, or update file, my wait time is always brief.

However I’m also aware that the Archer AX6000 is, at the moment, probably a tad of overkill—at least for me. Yes, it supports Wi-Fi 6 and other new technologies, but some of those are still in relatively early stages and aren’t yet a necessity. Also, while it’s true that the Archer AX6000’s transfer speeds are very fast, the demands I put on it don’t even begin to scratch its potential. The Archer AX6000 can support multiple streams of 4K video simultaneously—I just needed something that won’t lag during the final circle in Warzone. Still, if you want one of the fastest, most reliable wireless routers that will serve you well for years to come, and you can handle a price point that fairly reflects its superior performance, the Archer AX6000 is an excellent choice.

When you visit the B&H product page for the Netgear Nighthawk Pro Gaming XR500 Router, you’re going to see a lot of really important-sounding numbers. Things like 2600 Mb/s transfer rate, 1.7 GHz dual-core processor, 5 Gigabit Ethernet ports, and so on. And while all those numbers are, in fact, important, I would argue that the most impressive figure is the more than 1600 5-star reviews that the Nighthawk has received from our customers. That much praise for any item, regardless of category, is pretty exclusive, but with the Nighthawk XR500, it seems warranted.

Among dedicated gamers, including many pros, the Nighthawk XR500’s ability to keep pings down and erase latency makes it a constant favorite. Its Quality of Service (QoS) software prioritizes gaming devices for optimal performance. On top of that, the Nighthawk XR500’s additional software package gives users the tools they need to optimize and control the bandwidth usage in their homes, so even if you’re not a gamer, you’ll still be able to get the most out of your Internet connection.

The mesh around, nothing’s gonna ever keep ya down.

Mesh networks continue to be a popular solution for customers who need to cover their entire household with dependable Wi-Fi, and Google’s Nest Wifi is one the preferred options available. Stylish, easy to use, and truly effective at blanketing your home with speedy coverage, Nest Wifi is a top choice among customers. Even as the mesh market becomes more and more crowded, Nest Wifi manages to retain its popularity, thanks in part to its built-in smart speaker, which adds all the benefits of Google Home to your mesh network.

A budget router with an excellent bang-to-buck ratio.

One of the things you might have noticed about our list is that none of the mentioned routers are what you would call inexpensive. As is true with most consumer goods, top performance demands top dollar. However, if your budget doesn’t allow you to drop hundreds of dollars on a new wireless router, don’t despair. There are plenty of great value routers out there that can deliver solid performance at a fraction of the price.

The TP-Link Archer A7 AC1750 Router is one such device. It’s easy to set up and use, offers solid performance and range, has a decent number of additional features—for example, Parental Controls—and best of all, it doesn’t cost as much as your TV. If you’re a casual Internet user who’s looking for reasonable coverage, solid speed, and reliable service, the Archer A7 could be the right solution for you.

Everything about the ASUS ROG Rapture GT-AXE11000 Router is big: the size, the power, the performance, the coverage, and yes, the price. Like the Nighthawk XR500, the ROG Rapture GT-AXE11000 is coveted by gamers, but it’s also great for large households or anyone who needs a ton of speed and connectivity options—including access to the new 6 GHz frequency band, which can only be accessed by Wi-Fi 6E devices. In addition to the latest Wi-Fi technology, the ROG Rapture GT-AXE11000 features a tri-band design, eight external antennas, four Gigabit Ethernet LAN ports, and aggregate throughput speeds up to 11,000 Mb/s, which should satisfy even the most demanding households. Not everyone will need this much power, but those who do will not be disappointed.

Keep in mind that all of the wireless routers we’ve mentioned are merely suggestions. Everyone has different needs, different households, and different budgets. If none of these routers seem like the one for you, don’t worry. B&H carries hundreds of additional models, which means we’ve probably got the right one for you. If you need helping finding it, or if you have any questions about wireless routers in general, be sure to drop us a line in the Comments below. 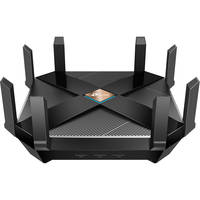 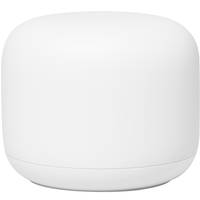 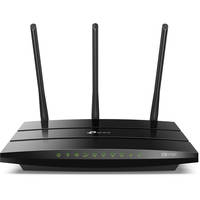 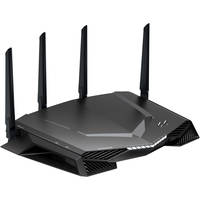 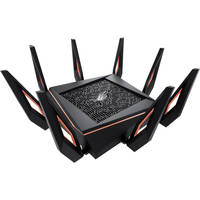